Acetabularia acetabulum is an umbrella-shaped pale green algae endemic to the Mediterranean sea. It is characterized by being highly calcified, a fact that determines the whitish tone of the specimens. They form extensive colonies, whose individuals are attached to the substrate by means of small rhizoids. Each individual can reach 8 cm in height, and is formed by a single cell, whose nucleus is located at the bottom near the rhizoids. It inhabits rocky areas in calm waters of the western Mediterranean and northern Adriatic. Acetabularia acetabulum reproduces during the months of May to June, when the segmented umbrellas can be seen fully formed, formed by a multitude of gametangia joined together. The nucleus of the cell, present in the rhizoid zone, is divided into 15,000-20,000 smaller nuclei that migrate to the umbrella chambers, from where they are released in the form of a flagellated spores. These spores leave the umbrella, remaining free in the water column, where they move freely thanks to the flagellum. During this period of free life, Acetabularia acetabulum spores require a period of 12 to 15 weeks of rest. Later, two spores can fuse together, losing their mobile capacity, reaching the sea bed, where the algae will develop.

Acetabularia acetabulum is the main food of a small and showy nudibranch: Elysia timida. Therefore, if we pay attention to this algae, it will not be surprising to be able to observe this fantastic nudibranch.

In the curiosity section of this species, we highlight that as it is a unicellular algae of large dimensions, it has been widely used as a model organism in numerous genetic and molecular studies. Studies carried out by Joachim Hämmerling between the 30s and 50s showed that the nucleus of a cell was the region in which the genetic information was residing. He reached this conclusion using two species of the genus Acetabularia (Acetabularia acetabulum and Acetabularia crenulata) in which he exchanged the part of the umbrella between the species, which gradually changed the original shape of teh umbrella to the shape determined by the base of the specimen. Additionally he experimented with the introduction of nuclei of different species of the genus Acetabularia, obtaining as a result hybrid species. 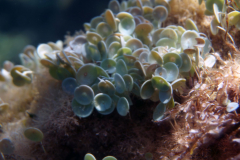 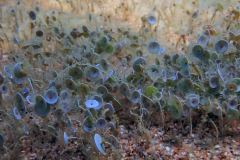 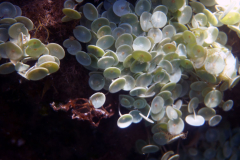