This beautiful coral, known as elkhorn coral or scientifically Acropora palmata was and is today in certain regions probably one of the most frequent corals in the Caribbean sea. Currently, Acropora palmata is a species catalogued by the International Union for Conservation of Nature (UICN) as a critically endangered species. This is due to the alarming decrease in the number of Acropora palmata specimens that has taken place in the last decades.

Acropora palmata is a coral found in shallow (1 to 20 meters) and very well lit reefs exposed to waves in the Caribbean Sea. It forms colonies that can reach very considerable dimensions, up to 4 meters wide and more than 2 meters high. The structure of an Acropora palmata colony is composed of various conical and thick branches, flattened horizontally, which are arranged obliquely and parallel to each other. The morphology of the branches of this coral resembles the horns of a elk, and that is why its common name. These branches create the ideal habitat for a multitude of crustaceans and reef fish, hence the vital importance to the ecosystem of this species. The coral is generally of a brownish coloration, although it is also possible to find greenish and even yellowish specimens. The tips of the branches, however, are white. This is because in these growing regions or recently formed, the symbiotic zooxanthellae algae characteristic of corals have not yet been established. Therefore, until this establishment of the algae in the new tissues occurs, these areas live at the expense of the rest of the colony.

Within the slow growth of the corals, it is considered that the growth of Acropora palmata is fast, being able to grow in one year between 5 and 10 cm. Reproduction is mostly asexual, through fragmentation of part of the colony. The fragment of the colony joins the substrate, giving rise to a new colony. This phenomenon is usually associated with, among other things, strong tropical storms, which break the longest branches of the colony. On the other hand, sexual reproduction occurs between the months of August and September, when millions of gametes are released into the water. Colonies are simultaneous hermaphrodites, that is to say that the same colony produces both male and female gametes. In the water, the gametes are fertilized generating an egg that will be part of the zooplankton and will be at the mercy of the currents. After several days of drifting, a larva is formed that will settle firmly to the sea floor to begin the generation of a new colony through the germination of new polyps. 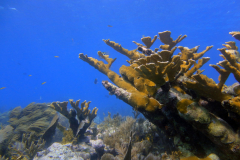