Aiptasia mutabilis is a solitary and very common anemone in the waters of the northeast Atlantic (from the French Atlantic coast to the Canary Islands) and in the entire Mediterranean Sea. It generally lives in rocky regions and very often in cavities or crevices, from where we will only be able to observe the tentacles of the specimen.

The body of Aiptasia mutabilis is formed by a trunk that can reach 15-20 cm in length. At one end, it has an adherent surface in the form of a suction cup, which allows the specimen to be firmly anchored to the rocky substrate inside the crack it has decided to inhabit. At the opposite end of the specimen, we will find the tentacles, which usually do not exceed 5-6 cm in length. These are cylindrical and stubby at the base and as they reach the end of the tentacle they narrow to a slender tip. The tentacles are arranged, around the mouth opening, in 6 concentric circles, having a total of 136 tentacles. The specimens of Aiptasia mutabilis usually have a translucent coloration, based on the yellowish brown color. This is due to the presence of symbiotic algae inside their body. The oral disc is usually marked by patterns of bluish to greenish lines located radially to the mouth, while the tentacles usually have whitish spots or bands.

The feeding of Aiptasia mutabilis consists of the capture by its tentacles, and thanks to the stinging cells present in them, of zooplacton, small invertebrates and even small fish.

Aiptasia mutabilis is a species with separate sexes that can reproduce both sexually and asexually (usually the most common). Sexual reproduction consists of the liberation by male and female specimens of their gametes, to be fertilized in the water current, after which a larva is formed that later suffers a process of metamorphosis by which it settles in the bottom and generates an adult individual. The asexual reproduction, is carried out by means of the division of its trunk in two. The piece of the splitting tissue will generate the adherent surface and tentacles to form a clone of the original specimen.

In the section of curiosities, we highlight two aspects. On the one hand, if Aiptasia mutabilis feels attacked, it has the capacity to expel a series of white filaments of a viscous nature and highly urticant, through its mouth opening, which makes the attacker give up. The second fact to be highlighted is that symbiotic relationships are often established with Periclimenes amethysteus shrimp, so careful observation of Periclimenes amethysteus specimens may result in a pleasant surprise. 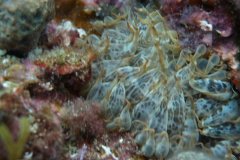 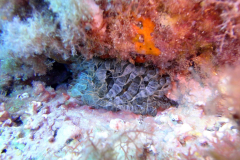 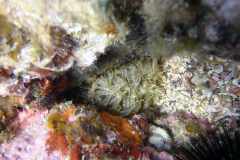 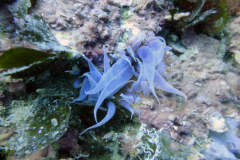