Anemonia sulcata or also known as snakelocks anemone, is an anemone of the family Actiniidae (order Actinaria) within the anthozoans class. We will find this species in coastal rocky habitats, very frequently in the Mediterranean Sea, and somewhat less frequently, but still common in the Atlantic Ocean.

The body of Anemonia sulcata is characterized by two regions. The first is the basal disc, a structure with which the specimen attaches itself to the rocky substrate. Depending on the conditions, it is also able to detach itself from the substrate and move in a 'limited' way until it finds a better position. From the basal disc, the second region arises, consisting of long and slender tentacles, arranged in 6 spirals surrounding a central oral opening. The ends of the tentacles may be violet in color, and these are endowed with stinging cells (cnidocytes). The body color of Anemonia sulcata is variable among specimens, with green, grayish and even light brown colors.

There are two ecotypes of Anemonia sulcata, one that occurs in shallower waters (0-5 meters deep) in which specimens develop a basal disc up to 5 cm in diameter and have less than 192 tentacles (usually 142-148), while the second ecotype corresponds to specimens found at somewhat greater depths (5-25 meters deep), in which specimens develop more extensive basal discs (15 cm in diameter) and have a greater number of tentacles (192-348).

In the behavioral section, we note that it is common to observe association relationships between Anemonia sulcata and other species. This is the case of the crabs Inachus phalangium and Maja crispata, which seek the shelter of the anemone in exchange for its cleanliness. We can also observe the small goby Gobius bucchichi crouched on the base of the anemone and partially covered by its tentacles, clearly benefiting from the protection that the stinging cells of the anemone give it against possible predators. And finally, we also highlight the small but very interesting crustaceans Leptomysis mediterranea, which usually form small swarms of individuals around the specimens of Anemonia sulcata.

The diet of Anemonia sulcata consists on the one hand of organic compounds provided by the symbiont zooxanthellae algae present in their tissues (and partly responsible for the coloration of the specimens). The other source of food is the capture of small invertebrates and small fish by the tentacles through their stinging cells.

The reproduction of Anemonia sulcata occurs predominantly during the months between March and May in the Mediterranean Sea. It is a dioecious species, that is to say that it has separate sexes, in which males and females release their gonads into the water for fertilization to occur and a larva to form. It is also possible for specimens to reproduce asexually, by means of partitioning or gemmation of their basal disc. Specimens usually become sexually mature when their discs exceed 2.5 cm in diameter. 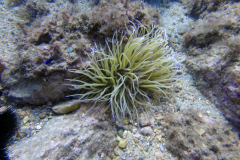