The mediterranean tube anemone or Cerianthus membranaceus is a species belonging to the Anthozoa class, order Spirularia and family Cerianthidae. This species is found throughout the Mediterranean Sea, as well as in the waters of the Cantabrian Sea. It generally inhabits muddy/sandy regions of not great currents, but with smooth and constant currents.

The body of Cerianthus membranaceus reaches 40 cm in diameter (counting the tentacles) in adult animals, and consists of a tubular region buried in the substrate that secretes mucus that together with the marine sediment forms a tube that grows as the animal grows. Next we find a disk where the mouth is located and from which two crowns of non-retractable tentacles emerge. Between the two crowns, there are between 150 and 200 tentacles surrounding the mouth cavity. The tentacles of the outermost crown are usually longer and wider than those of the inner crown. The tentacles are endowed with a multitude of stinging cells, known as cnidocytes, which are used to capture prey. Once the prey is immobilized thanks to the toxins released by the cnidocytes, they are directed by the tentacles towards the mouth, to be digested inside the tubular region of the animal. As for the coloration of Cerianthus membranaceus, this can be very variable among individuals. There are specimens with white, yellowish, brownish, violet, pink, blue or even green tentacles.

It feeds, as previously mentioned, using its stinging cells to capture small crustaceans, fish and plankton.

The reproduction of Cerianthus membranaceus occurs only through sexual reproduction. The specimens are sequential hermaphrodites, i.e. they begin life as male specimens and later transform into female specimens. Males release their sperm into the water, while females do the same with their eggs. Upon contact between the male and female gametes, fertilization occurs, forming a planktonic larva. The larva then settles to the seafloor, where it undergoes metamorphosis to form a juvenile Cerianthus membranaceus. 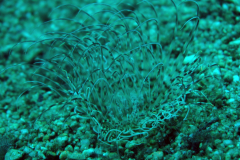 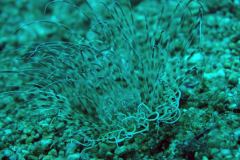 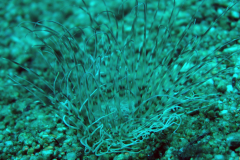