The golden anemone or Condylactis aurantiaca is a cnidarian belonging to the class Anthozoa, the order Actiniaria, and the family Actiniidae. This species of anemone is endemic to the Mediterranean Sea, where it lives on sandy/muddy bottoms up to 80 meters deep, remaining semi-buried, with only its oral disc and tentacles protruding to the surface.

The base of the animal, also known as the basal disc, can reach up to 7 cm in diameter and is translucent white with small white spots, although it is rarely visible to the observer. Above this basal disc is the oral disc, which can reach up to 10-12 cm in diameter and from which 5 rows of long tentacles emerge, with a total of 96 tentacles surrounding the oral opening. Each tentacle is approximately 8-10 cm long, and its color varies from yellowish green to grayish. Some specimens of Condylactis aurantiaca may have white bands on their tentacles, and the tips of the tentacles may be purple. In the center of the oral disc, we find the oral opening which usually has a violet color.

Condylactis aurantiaca specimens should be observed very carefully. Not only we will be surprised by the specimens of this anemone, but in many occasions we will also have the opportunity to observe the shrimp Periclimenes aegylios as it establishes symbiotic relationships with this anemone.

The feeding of the golden anemone is clearly carnivorous, and captures its prey by means of stinging cells (cnidocytes) present in the tentacles. Among the prey it captures are invertebrates, zooplankton and even small fish.

During the spring and summer months is the time when this species reproduces. Depending on the conditions of the environment in which it is found, it may opt for viviparous or oviparous reproduction. During the summer months and after the release of the male gametes into the water, when the male gametes enter into another specimen, they fertilize the eggs present there, giving rise to an fertilized egg that is released into the currents, and therefore reproduction is oviparous. On the contrary, during the spring months, the release of male gametes and internal fertilization of the eggs also occurs, but in this case the egg formed is not released but remains inside the specimen until the moment of hatching, and the larvae are then released into the current. 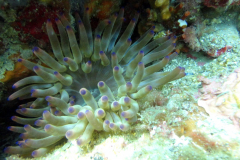