Tree coral (Dendronephthya spp) are a very diverse group of species with more than 250 different species, many of which are extremely difficult to differentiate with the naked eye, which is why we group all these species under the name Dendronephthya spp. The name of these species derives from two Greek terms, on the one hand 'dendro' meaning 'tree', and on the other hand 'nephos' meaning 'cloud'. Dendronephthya spp. are classified within the cnidarians as belonging to the class Anthozoa, order Alcyonacea and within the family Nephtheidae.

The body of these corals lacks a hard calcareous skeleton, thus forming part of the group of so-called soft corals. The coloration can be extremely colorful and very bright, and if we look closely at the tissues, in many specimens we will be able to identify embedded in the tissue calcareous spicules of small size but of colors that contrast with the colors of the tissue that can be pink, red, purple, yellow, orange or combinations of these. The body is quite branched, finding at the ends of these ramifications groupings of polyps that each has 8 short but robust tentacles.

The feeding of tree coral is based on filtration, capturing both plankton and any organic particles present in the water. During the night is when the specimens are fully deployed, adopting a fully upright posture that maximizes the opportunities for their polyps to find their food. During the day, specimens are usually somewhat withdrawn or even unclipped. 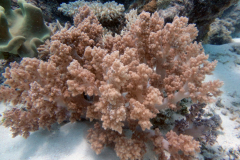