Diploria labyrinthiformis is a coral belonging to the class Anthozoa within which belongs to the order Scleractinia, and within the family Faviidae. It is a species found in the tropical reefs of all the oceans of the earth. They are abundant in environments such as lagoons or well-lit reef areas and depths of up to 40 meters, although in reality the vast majority of specimens will be found at a depth of 15 meters at the most.

Diploria labyrinthiformis has a massive calcium carbonate skeleton, with which they contribute to generate the reefs. The colonies are hemispherical and are characterized by numerous sinuous valleys about 5-8 mm wide and also ridges that cover the surface creating a meandering pattern, and therefore giving it a brain-like appearance, a term by which they are also known; the brain coral. Each of the different grooves that make up the colony contains a single polyp that adopts an elongated shape and has several mouth openings that are surrounded by tentacles. These polyps are light brown, yellowish or even some grayish-brown.

As for the feeding of Diploria labyrinthiformis, like many species of corals, it has inside its soft tissues, zooxanthellae algae in a symbiotic relationship, in which these algae get protection and a privileged place of access to light, obtaining the coral as a reward the by-products of photosynthesis of zooxanthellae in the form of organic compounds. Not only does it receive this reward of organic compounds, but also as a by-product of photosynthesis, oxygen is generated, which the coral takes advantage of to breathe. This food due to zooxanthellae accounts for approximately 70-95% of its requirements. The rest is obtained by capturing plankton and organic matter from the water thanks to the tentacles of the polyps of the colony.

Diploria labyrinthiformis can reproduce both asexually by gemmation and sexually by releasing male gametes into the water and internal fertilization of the female gametes. The larvae hatch internally and are then released into the sea, where the currents will drag them for a few days and then settle to the bottom, attach to the bottom and form a polyp that initiates the colony. 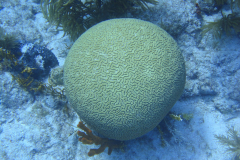