The yellow gorgonian or Eunicella cavolini is a cnidarian belonging to the class Anthozoa, the order Alcyonacea and the family Gorgoniidae. It can be found on rocky bottoms in the Mediterranean Sea at depths between 10 and 30 meters and always in areas with good lighting.

Eunicella cavolini is a colonial gorgonian, composed of polyps that are located in a semi-rigid structure, branched and yellow. The polyps can also be yellow, although there are also colonies that have white polyps. In any case, these polyps are small, reaching 2-3 mm in diameter and are arranged in 4 longitudinal rows with respect to the branches on which they are present. These ramifications are formed by cylindrical sections occurring in the same plane, thus adopting a fan shape that is generally oriented perpendicular to the dominant currents of the area. They will cling firmly through their flared base to the rocky substrate, so that they are able to withstand moderate currents.

The feeding of Eunicella cavolini consists in the capture by the polyps of the plankton present in the waters that the currents approach them. The fact that the colony is oriented perpendicular to the dominant currents maximizes the polyps' chances of capturing their food.

Reproduction occurs during the summer months, when the male polyps of the colony release their gametes into the water. When they enter the gastric cavity of a female polyp, they fertilize, giving rise to an embryo that will develop into a larva called a planula, which is released into the sea. After spending 1 to 4 weeks as part of the plankton, the larva descends to the bottom to undergo a process of metamorphosis and generate a polyp that forms a new colony. This polyp, through asexual reproduction by twinning, will give rise to all the individuals that make up the new colony. Colony growth is usually relatively slow, with developments of between 1 and 2 cm per year. 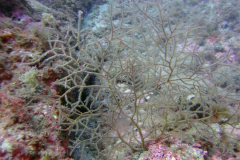