This species of gorgonian is characterized by its peculiar white coloration, and a branching structure in the form of a candelabrum, in which the branches occur close to the basal zone, and then run parallel to each other. In general, colonies of this species usually have few secondary branches. Specimens of Eunicella singularis can reach up to 70 cm in height, with specimens located at greater depths usually being larger in size compared to those located in shallower waters. The branches are between 3 and 5 mm in diameter and are not completely rigid, but present a certain degree of flexibility and are completely white. In them we find the polyps that make up the colony, which are translucent in specimens located below 40 meters deep, and greenish-brown in those located at shallower depths due to the presence of zooxanthellae algae inside.

As zooxanthellae are present inside the polyps of Eunicella singularis, feeding is largely provided by these algae. The zooxanthellae algae obtain protection and a privileged place of access to light, with the coral obtaining as a reward the by-products of zooxanthellae photosynthesis in the form of organic compounds. Not only does it receive this reward of organic compounds, but also as a by-product of photosynthesis, oxygen is generated, which the gorgonian takes advantage of to breathe. This food due to zooxanthellae, accounts for approximately 70-95% of its requirements. The rest is obtained by capturing plankton and organic matter from the water thanks to the tentacles of the colony's polyps. The fact that the colony is oriented perpendicularly and in a single plane with respect to the dominant currents maximizes the polyps' chances of capturing their food.

Reproduction of Eunicella singularis occurs during February through April. During this time, the male polyps of the colony release their gametes into the water. When they enter the gastric cavity of a female polyp, they fertilize, giving rise to an embryo that will develop into a pink larva that will be gestated internally for 12 to 17 months. After this time the larva is released, becoming part of the plankton and dispersing with the currents. Subsequently, the larva will descend to the seabed to undergo metamorphosis and begin the formation of a new colony of Eunicella singularis, reproducing asexually by gemmation. Its growth rate is between 1.5 and 4.5 cm per year, so large specimens take a long time to generate.

The polyps of this gorogonia are the food and laying place of several animal species, such as the nudibranch Tritonia nilsodhneri or the mollusc Neosimnia spelta. We can also find among its branches the shrimp Balssia gasti. 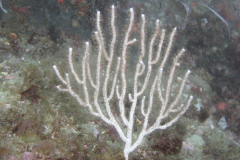 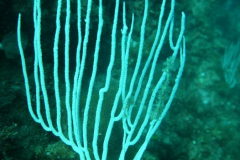