The mushroom coral, (Fungia fungites) is a solitary cnidarian belonging to the class Anthozoa, the order Scleractinia, and the family Fungiidae. It lives in reefs located in tropical seas, in shallow areas (from 1 to 25 meters deep), well illuminated and close to the coasts. They are mostly found on rocky slope bottoms and sandy reef substrates, between lagoons and areas protected from strong currents in the Indian and Pacific Oceans, on the coasts of East Africa, Madagascar, Seychelles, Maldives, Red Sea, India, Indonesia, New Caledonia, Philippines, Japan, New Guinea, Australia and in the Central Pacific Islands.

Fungia fungites has a flattened ovoid shape of at most about 30 cm in length, and from the center of which a multitude of calcareous partitions depart towards the perimeter of the polyp. In the same center is located a single mouth opening, which will stop the possible organic debris that its small tentacles covering its entire body extension can capture, and through undulating movements, they go from the outer to the inner ones until they reach the mouth opening. It is a species that we can find as many colors as we can imagine, fluorescent green, orange, violet, yellow, ... Although young individuals are strongly anchored to the substrate, specimens of a certain size are free-living, not being anchored to the substrate, but can even move on it a few centimeters a day and even turn over if they have turned around.

During daylight hours, specimens of Fungia fungites usually have retracted polyps, however, these are extended during the night hours to capture their prey, among which we find zooplankton and small invertebrates. Although they possess this active feeding ability, it is by far not their major food source. Their main source of food is the zooxanthellae algae that they have in a symbiotic relationship within their tissues. The algae obtain protection and a privileged place of access to light, obtaining the coral as a reward the by-products of photosynthesis of zooxanthellae in the form of organic compounds. Not only does it receive this reward of organic compounds, but also as a by-product of photosynthesis, oxygen is generated, which the coral takes advantage of to breathe. This feeding due to zooxanthellae accounts for approximately 70-95% of its requirements.

The reproduction of Fungia fungites can be done asexually by twinning, or by sexual reproduction in which the gametes are released into the sea to produce a larva that is dragged by the currents, and after several days drifting down to the bottom and begin the sessile phase in which they secrete calcium carbonate to form their skeleton.

Until very recently, the genus Fungia had more than 30 species, but the World Register of Marine Species has updated its taxonomy, based on recent studies, reducing these 30 different species into a single species in the genus, Fungia fungites. 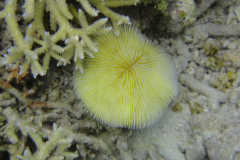