Within the taxonomic classification of cnidarians we find in the class Anthozoa, the order Alcyonacea and within the family Gorgoniidae to which belongs the Gorgonia ventalina. This species of gorgonian lives in the waters of the Caribbean Sea and eastern Atlantic Ocean in an area ranging from Bermuda to Florida, the Gulf of Mexico and Curacao. It grows in waters close to the coast and generally not deeper than 15 meters, but in which there are certain currents due to waves.

Gorgonia ventalina is a colonial cnidarian that takes the form of a very compact lattice fan formed by numerous branches oriented in a single plane, which is usually perpendicular to the main currents of the area where it lives. These branches are rounded in section and slightly compressed in the same plane as the fan. In them, we find small calyxes that are distributed forming two rows along the edges of the branches, and in which the polyps that make up the colony are located. Their skeleton consists of both calcite and gorgonin, a collagen-like compound that gives them a certain flexibility with which to adapt to marine currents. The fan is usually purple in color, although some specimens may present some modifications, with the main rays in purple, but the branches yellowish, or completely yellowish specimens. They can reach heights of up to 1.5 meters.

Gorgonia ventalina is a filter-feeder. During the night, its polyps extend their eight tentacles to capture their prey, among which we find zooplankton and small invertebrates. Additionally, the tissues of this gorgonian have in a symbiotic relationship dinoflagellates Symbiodinium spp that have the ability to perform photosynthesis, providing organic compounds to the gorgonian in exchange for protection and privileged access to light.

It is very common to observe other species located on specimens of Gorgonia ventalina. For example, the flamingo tongue snail (Cyphoma gibbosum) is often found feeding on gorgonian tissue. Another predator of the tissues of this species is the nudibranch Tritonia hamnerorum, which as in the previous case are immune to the stinging defenses of Gorgonia ventalina, feeding on its tissues. 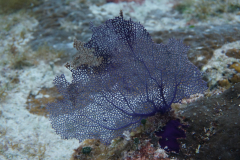 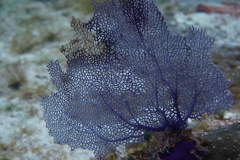 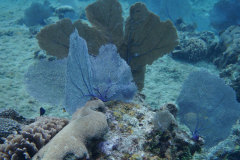 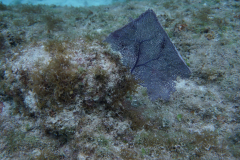