The chamaleon sea fan or Paramuricea clavata is a species of gorgonian that inhabits the waters of the Mediterranean Sea and the Atlantic Ocean off the Spanish and Portuguese coasts. This cnidarian is taxonomically classified within the class Anthozoa, the order Alcyonacea and the family Plexauridae. It lives on sandy bottoms where it buries its base to hold on rocky bottoms, and generally in shady areas and rather cold waters. As for depths at which we can find this species, the records indicate the presence of specimens up to 110 meters deep, although at depths less than 40 meters is where it is most often observed.

Paramuricea clavata forms a fan-shaped structure in a single plane, with many irregular branches, which is positioned perpendicular to the dominant currents of the area where they live. Among the substances that make up the skeleton of this colonial gorgonian we find gorgonin, a protein substance that gives rigidity to the skeleton, but at the same time gives them a certain degree of flexibility to allow them to adapt to the currents. Both the polyps, which reach 10 mm in height, and the skeleton of the colony itself, called corallum, are red and/or yellow in color. The color pattern of these gorgonians is variable, being uniformly dark red, dark red with yellow tips, with a progressive degradation from red to yellow, and even purplish. The colony can reach up to 1 meter in height.

The polyps of Paramuricea clavata capture their prey using their 8 small tentacles, among which we find phyto- and zooplankton, copepods and in general any small marine invertebrate or organic particle in suspension. This gorgonian, unlike what is usual in other gorgonian species, feed throughout the day and not only at night. This will allow us to easily observe their fully extended polyps and enjoy their beauty.

Paramuricea clavata is a very long-lived species. There are records of specimens up to 100 years old. They reproduce sexually. They have separate sexes, in which each of the colonies has a certain sex. Male colonies release their gametes into the sea, which upon contact with female colonies, internally fertilize their eggs to form an embryo that is incubated in the female colony. Once the larva is fully formed, it is expelled from the female colony to become part of the zooplankton and therefore drift with the currents. After a short period of time, the larvae settle on the seabed to undergo a process of metamorphosis and generate the polyp that will originate the entire colony. This polyp originating the colony, through asexual reproduction by means of twinning, will give rise to the whole new colony. 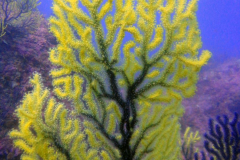