Few species of colonial cnidarians are as simple yet impressive to observe as Parazoanthus axinellae, also known as the yellow encrusting sea anemone. This cnidarian is taxonomically classified within the class Anthozoa, the order Zoantharia and the family Parazoanthidae. It is a species found along the coasts of the Atlantic Ocean of southern Europe and in the Mediterranean Sea. They live at depths of up to 200 meters, being very frequent between 20 and 30 meters deep. They grow on rocky substrates with low light intensity and slight currents, so they are often found under ledges, overhangs or on the walls of caves. The specific epithet axinallae, refers to the fact that it is common for this species to be embedded in sponges of the genus Axinella, although in reality they are not only embedded in this type of sponges, but also on rocks, gorgonians, or even shells of molluscs.

The polyps of Parazoanthus axinellae can reach up to 3-4 cm in height and each have between 24 and 36 long tentacles arranged in two rows on the edge of the oral disc. They are bright yellow or orange in color and each of the polyps is connected to the rest of the polyps in the colony by stolons formed by common tissue. These colonies of polyps can form very dense and extensive agglomerations.

The feeding of Parazoanthus axinellae is suspensivorous in nature, capturing small prey such as small crustaceans, larvae and marine invertebrates that the marine currents carry to their location so that the tentacles of their polyps can catch them up. The peak feeding time is usually at night, when the polyps will be fully extend to maximize the chances of capture.

The colonies of Parazoanthus axinellae include both male and female specimens. Oviparous reproduction of this species occurs during the early spring months, although it also has the ability to reproduce asexually by creating vegetative bumps that eventually form a new colony polyp. 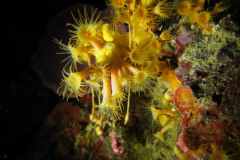