Pocillopora meandrina is a coral belonging to the class Anthozoa, the order Scleractinia and the family Pocilloporidae. They inhabits the shallow waters and therefore very well-lit coral reefs of the Indian and Pacific Oceans.

It is a colonial species, consisting of numerous small polyps that form robust-looking structures shaped like small vertical hemispherical bushes, resembling cauliflower in shape, hence its common name. The branches of Pocillopora meandrina colonies radiate from the central part of the colony and widen as they reach their ends, where they adopt undulating shapes. The color of the specimens of cauliflower coral are variable, there are specimens with brown, pink, grayish colors.

The feeding of Pocillopora meandrina, as occurs in the vast majority of shallow reef corals, is based mainly on the photosynthetic activity carried out by zooxanthellae algae it has inside its tissues. The algae obtain protection and a privileged place of access to light, with the coral obtaining as a reward the by-products of photosynthesis of the zooxanthellae in the form of organic compounds. Not only does it receive this reward of organic compounds, but also as a by-product of photosynthesis, oxygen is generated, which the coral takes advantage of to breathe. This feeding due to the zooxanthellae represents approximately 70-95% of its requirements and is complemented by the capture of zooplankton and organic particles by means of the tentacles of its polyps. We will find during the night hours, the polyps fully extended in the specimens of Pocillopora meandrina, as this is the time when they take the opportunity to capture their prey that are dragged by the currents.

Pocillopora meandrina is a hermaphrodite species. The male gametes are released into the water, which will internally fertilize the female gametes of another specimen. As a result of fertilization, a larva develops inside the female polyp, which will be incubated until the larva is formed. The larva is released and exposed to currents that allow them to disperse and colonize new territories. After several weeks of free life, the larva descends to the bottom where a process of metamorphosis takes place to form the polyp originating the colony. This polyp, through asexual reproduction by twinning, will form a new colony. 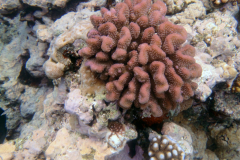