Cotylorhiza tuberculata is a species of Scyphozoan (Scyphozoa) belonging to the family Cepheidae. It is a species endemic to the Mediterranean Sea that we usually find in surface waters, especially during the months of July to November.

This jellyfish has a more or less flat, yellow-white bell with a central protuberance that gives it the shape of a fried egg. The margins of the bell are divided into 16 main lobes, which in turn are subdivided into numerous smaller secondary lobes. It has 8 curled oral arms ending in small but very numerous tuberculate projections with intense violet-brown tips.

As already mentioned in the introduction to scyphozoans, Cotylorhiza tuberculata has both medusa and polyp phases. During the polyp phase, specimens reach a size between 5 and 10 mm. During the spring, these specimens begin to generate sexed medusae by asexual reproduction, which are released in the form of small larvae.

The diet of Cotylorhiza tuberculata consists basically of plankton, both phytoplankton and zooplankton. Additionally, in the tissue of the specimens we can find zooxanthellae algae in an endosymbiotic relationship, which provides an extra food source, since these algae are photosynthetic.

Cotylorhiza tuberculata reproduces sexually. Female jellyfish are fertilized internally with the sperm of the males, which are deposited with the oral arms inside the females. After a period of gestation of the larvae, the female will release into the water a large number of planula-like larvae which migrate to the seabed, completing the metamorphosis to become polyps.

This species has a slightly stinging substance, but does not pose any risk to people, however, the risk of this species to humans is given by the large number of individuals that are generated in the Mediterranean Sea, constituting real swarms that although individually may not be dangerous, the possibility of receiving several simultaneous stings increase the danger.

The toxin of this species has been used in the field of ontological research, observing a cytotoxicity of the compound against certain cell lines of breast cancer. 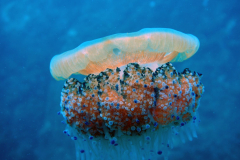 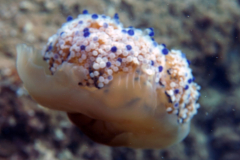 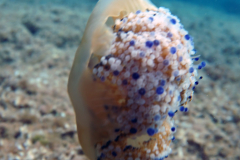 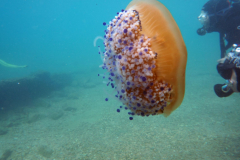 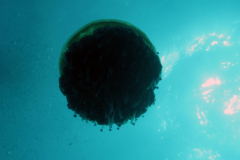 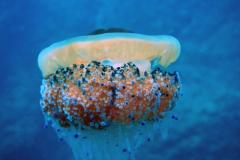 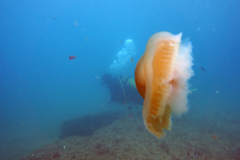