Known under the name of mauve stinger, the species Pelagia noctiluca is a jellyfish of the family Pelagiidae (order Semaeostomeae) within the class Scyphozoa. Its scientific name derives from the Latin 'pelagia' meaning 'of the sea', the term 'nocti' which means 'night' and finally the term 'light', which in Latin is equivalent to 'luca'. Therefore its scientific name comes to describe a marine organism with the ability to emit light in the dark, and is that Pelagia noctiluca has the ability to emit bioluminescence when stimulated by turbulence created by waves. In such situations, it emits a weak but visible (during nighttime hours) pulse of light. It can be found in the waters of the Mediterranean Sea as well as in the Atlantic Ocean. It is a pelagic species, that is, it usually lives in the high seas, although when conditions are favorable (increased nutrients, lower levels of predation, increased water temperature, ...), they may experience a sudden increase in the number of specimens, forming large schools that can be dragged by currents to coastal waters.

Pelagia noctiluca is a moderate-sized jellyfish, with a bell between 3 and 12 cm in diameter. The body has a radial symmetry and a central gastrovascular chamber from which 4 long oral arms emerge whose margins are undulating. From the margin of the bell of the specimen, 8 long tentacles emerge and of lesser thickness than the oral tentacles. The body color of Pelagia noctiluca is translucent, with violet-pinkish spots on both the bell and tentacles of the specimen.

Of the characteristic polyp and medusa phases of cnidarians, Pelagia noctiluca has only the medusa phase. The reproduction of this species is sexual, and occurs between late summer and early winter. During this period, and always during the day, eggs and sperm are released into the water to be fertilized and form a larva. After 3 days, the planktonic larva becomes a planula, which in the course of a week will develop the typical structures of adult specimens. When the bells of the juveniles reach diameters of 5-6 cm, they reach sexual maturity. Their life expectancy is approximately 9 months.

The feeding of Pelagia noctiluca is markedly opportunistic. By means of the stinging cells present in its tentacles, it captures its prey, among which we find planktonic crustaceans, mollusc larvae as well as fish larvae and eggs. 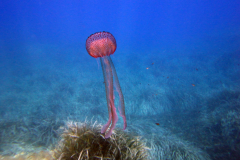 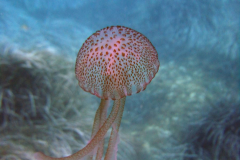