Within the extensive world of the so-called ghost crabs defined in the order Decapoda and the family Ocypodidae, we find Ocypode cordimana. It is a species that is distributed along the tropical and subtropical beaches of the Indian and Pacific oceans, being very abundant in the Australian coasts. It is common to observe it between sunset and sunrise, when hundreds of individuals come out of their carefully dug burrows on the beach in search of food. It is a rather skittish species, and is extremely fast moving, which is why they are known as ghost crabs, because in the blink of an eye they have disappeared.

Their body can reach 5 cm in width, and has a rectangular shape. Ocypode cordimana has two long claws that point slightly inward, and in male specimens, the right one is much more developed than the left one. The rest of its limbs are relatively long locomotor legs that end in a point. It has large eyes that are located at the end of short peduncles, and no 'horns' at the top of the eyes. The color is pale bluish-gray and lacks darker markings on the back of the body.

The feeding habit of Ocypode cordimana is one that will clearly attract a lot of attention. They graze the sandy beaches as the water level drops with the tides, filtering from the grains of sand, algae and small invertebrates on which they feed. While what is described may not be the most striking thing, it is the way it does it that catches the eye. As it processes the sand, it forms small balls of sand, which when they reach between 0.5 and 1 cm in diameter are deposited on the beach. And as if this were not enough, the pattern it draws with these sand balls is extremely interesting, as it makes a radial pattern with the center in its burrow and that as the day goes by it expands further and further away from it. This, together with the high densities of specimens on the beach, means that at each low tide a pattern of balls is drawn across the beach, which the high tide will erase, to leave the canvas blank and redraw the pattern with the next low tide. 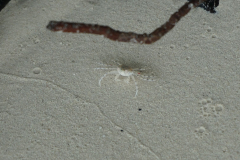 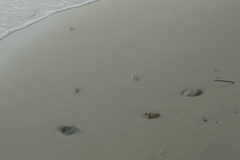