The European spiny lobster or Palinurus elephas is classified within the order Decapoda and the family Palinuridae. It is a very common species in the Mediterranean Sea, and also present in waters of the eastern Atlantic Ocean, from the coasts of Norway to Morocco. It inhabits rocky coasts between 10 and 70 meters, hiding during the day in cracks and hollows of the rocks, from which only its two long antennae will show.

The body of Palinurus elephas, can reach up to 50 cm in length and consists of an elongated carapace, followed by 6 segments and a fan-shaped tail. The carapace has numerous spines that are not aligned with each other, but randomly distributed over the dorsal surface of the carapace. The eyes are positioned lateral to the rostrum, just anterior to the base of its two long antennae, and each eye is protected by two fairly prominent supraorbital spines that are relatively close together forming a 'V'. Looking at the body of Palinurus elephas from the ventral side, we will find five pairs of legs or also called pereiopods. These are arranged symmetrically on the carapace, with the first two pairs of legs being slightly larger than the rest. In addition to the legs, we also find a pair of antennae whose length far exceeds that of the animal's own body, as well as a pair of much shorter antennae.

As for the body coloration of Palinurus elephas, the base color is reddish brown along its body, with a pair of large yellow spots on the top of each of the abdominal segments. The antennae are colored with bands of brown, red and yellow, while the legs have lighter colored longitudinal lines. In juveniles, the coloration is slightly different, and they have a longitudinal band along the upper part of the body that crosses the entire body, from the head to the tail, and is yellow in color.

It is a nocturnal animal, which comes out of its hiding places during the night to look for food. Among the species on which it feeds, we find small worms, crabs, and in general any remains or dead animals.

The reproduction of Palinurus elephas occurs during the months of September to October in the Mediterranean Sea. Females are able to lay hundreds of thousands of eggs that will be carried under their abdomen until the following spring, when the larvae will hatch. They will go through a planktonic life phase, which can last up to 5 months, and in which they will undergo different molts and metamorphoses until they reach a juvenile lobster individual, which will go down to the seabed in search of food and shelter. 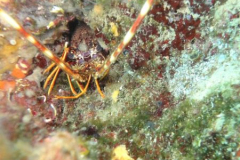 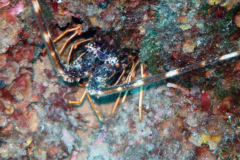 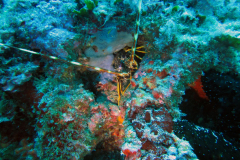 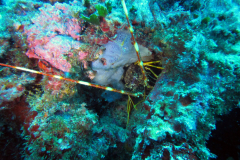