Panulirus versicolor is a species of lobster that is distributed by the waters of the Indian and western Pacific Oceans, including from the African coasts of the Indian Ocean, the entire Red Sea, to the waters of southern Japan, Micronesia, northern Australia and French Polynesia. It inhabits the shallowest regions of tropical reefs and lagoons, generally at a depth of between 4 and 12 meters, although they can be present up to 16 meters deep. Panulirus versicolor is a solitary species and very active at night. During the day, it remains sheltered in cracks and crevices from which only part of its head and its long antennae emerge. Its body can reach up to 40 cm in length, although the most common is that they do not exceed 30 cm.

The body of Panulirus versicolor is fortified by a rounded and thorny limestone shell, which changes from time to time. The body is drawn by a mosaic pattern in which intense blue and green predominate, although in larger individuals, green is the most common color. Among the distinctive characteristics compared to other species of the same genus, we highlight that they have 2 pairs of spines on the antennial plate (region located just in front of the eyes). Behind the eyes, they present some ocular spines of considerable size, which can reach a length equivalent to more than 3 times the height of the carapace to the eyes. Another characteristic of this species can be observed in the second and third abdominal segment of the tail carapace. In the center of these segments and located on both sides of the abdomen, we find slightly sunken areas. The remaining 3 posterior segments are smooth and lack this slightly sunken area. The abdomen is green, with white lines and blue margins on the back of each of the segments that constitute it.

Panulirus versicolor has two large antennae, which on its inner side are usually pink, while the outer surface is usually blue. Also they possess two antennas, which are composed by a peduncle that forks to form two thinned antennas, called flagella that usually are of a whitish color. Generally, the bifurcated portion of the antennas is longer than the non-bifurcated region or peduncle. As for the legs, the first 4 pairs lack tweezers. All the legs have an intense blue coloration, in which vertical white lines stand out along their extremities.

The feeding of Panulirus versicolor is carnivorous in nature, and consists mainly of carrion, molluscs, crustaceans, and occasionally small fish.

Regarding the reproduction of Panulirus versicolor, it is important to note that females can lay more than 700,000 eggs, which they will carry on the inside of their tails. These eggs are of an intense red color. 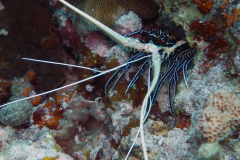 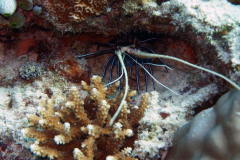 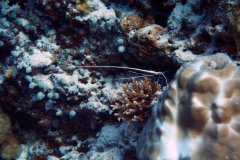 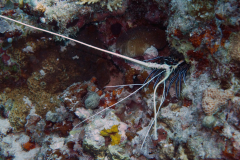 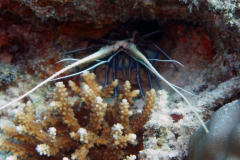 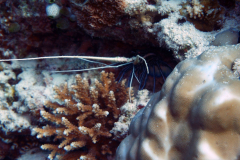