The Percnon gibbesi crab is a typical species of the coasts of the Atlantic (from the coasts of Florida to Brazil in the western Atlantic, and from the Madeira Islands to the Gulf of Guinea in the eastern Atlantic) and Pacific Oceans (from California to Chile). In 1999, the presence of Percnon gibbesi was first documented in the waters of the Balearic Islands and Sicily, cataloguing it as an invasive exotic species from the Mediterranean Sea. Since then, it has expanded its presence in the Mediterranean Sea to the coast of Italy and Malta. It is a species that inhabits rocky regions, where it finds safety from potential predators. Generally they are found in very superficial waters (between 0 and 4 meters) and with great abundance of algae of low bearing, on which they move with a very surprising agility and speed. This allows them to move in the area below the line of the wave breaker in search of food.

Percnon gibbesi is characterized by an extremely flat and slightly oval body, in which without counting its extremities, it can reach 3-4 cm in length. Its claws are small, while the legs (also called pereiops) are quite long. The front lateral parts of both the legs and the carapace, has a small saw-like teeth. It presents some bright colors, the body is blue, with a vertical turquoise green line that crosses from the eyes to the back of the animal. In the legs it presents alternating black, greenish and yellow spots, being the joints, as well as the tips of the legs of an intense red color.

Percnon gibbesi's diet is based on algae, although occasionally they may feed on small crustaceans and even small fish.

During the months between June and September, and linked to water temperature, is when the reproduction of Percnon gibbesi occurs. The females will incubate the eggs in their abdomen, releasing larvae after incubation that will become part of the zooplankton. These larvae will undergo several molts until they mature into young benthic individuals. 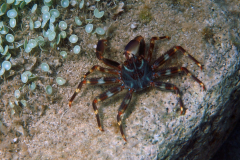 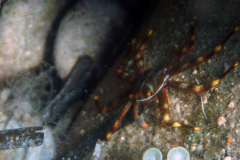 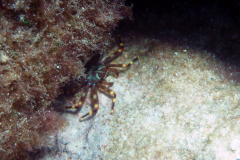 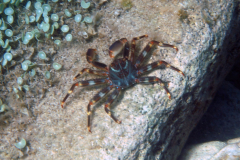