The banded coral shrimp or Stenopus hispidus is a shrimp belonging to the order Decapoda and within this to the family Stenopodidae. We can find specimens of this species in all tropical seas. In the western Atlantic Ocean, from the Gulf of Mexico in the north to the Brazilian coasts in the south, as well as in the Indian and Pacific Oceans, from Madagascar, the Red Sea, Australia, New Zealand and the French Polynesian islands. It usually inhabits shallow coral or rocky bottoms, although there are records of specimens up to 200 meters deep. It shelters in coral hollows or in caves or under rocky ledges, preferably in calm waters.

They can reach up to 8 cm in length, and show a very distinctive body coloration: a white body with striking orange transverse bands on the abdomen and on a pair of very long pincers, called chelipeds. The basal area of the limbs or pereiopods are on the contrary of a bluish hue. Certain parts of the body of Stenopus hispidus are translucent, such as the swimming appendages. Another feature of this species is that both the abdomen and the pincers have numerous spines.

It is considered that Stenopus hispidus is a fish cleaning species, and in fact it is common to observe it cleaning moray eels and other fish. Through this relationship with other species, the boxer shrimp deworm the fish that come to the cleaning points where Stenopus hispidus specimens are present. To attract these species, the rays shrimp uses its three pairs of white antennae to move and attract the fish for deworming.

Generally, we will find Stenopus hispidus forming pairs, since we are in front of a monogamous species, which establishes a very long-lasting pair relationship. They stay in the same area for days, months or even years. They are shy in nature and spend most of their time in their caves, preferably in shady places.

Reproduction of this species begins with a courtship ritual, consisting of a rhythmic dance performed by the male to the female, who usually remains motionless. After this dance, the female embraces the male with her claws, indicating that she is ready to reproduce. At this point, the male presses his abdomen against the side of the female, transferring his sperm to a specially designed receptacle, which the female uses to fertilize several clutches of eggs. Once the eggs are fertilized, the female transfers them to the abdominal swimming paddles, and will transport and care for them for a month and a half, and later during the night they hatch and become free-living. 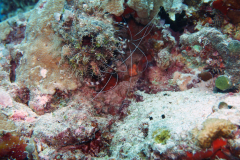 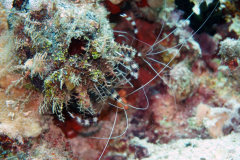 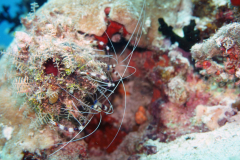 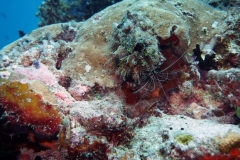