Comaster nobilis is a sea lily of the family Comatulidae in the class Crinoidea (order Comatulida). We find this species in the waters of the Indian and Pacific Oceans, from the Great Barrier Reef in Australia to Indonesia, Malaysia, New Caledonia and the Philippines. It is found on both soft and hard corals, in shallow waters and with the presence of coral reef currents, with depths ranging from 10 to 50 meters.

The largest recorded size of Comaster nobilis specimens is 40 cm. Its body is formed by a calyx or cup-shaped basal disc, from which elongated appendages emerge from the lower part that allow the specimen to cling to the substrate. In the central part of the basal disc, we find both the mouth and the anus. Emerging from the basal disc, there are between 35 and 4o long pinnulate arms in the same plane and that take the appearance of feathers. The coloration is variable depending on the geography, although the most common is based on the intense yellow color, and in some specimens with the regions of the arms near the central disk of black, green or white color on the outside.

Comaster nobilis are generally most active at night, when they will be with their arms fully unfolded. During the day, although it is possible to observe them with their arms unfolded, it is normal to find specimens with their arms retracted. It feeds mainly on detritus, phytoplankton and zooplankton, which it captures by filtering the water with its outstretched arms. Once one of the arms has captured enough particles, it rolls up into a 'snail' shape to bring the food closer to the mouth, where a comb-like structure retains the particles that are subsequently ingested. Once the food is placed in the mouth, the arm uncoils and continues to filter the water in search of more food.

Reproduction of Comaster nobilis is sexual, releasing eggs and sperm into the stream to fertilize and form a larva. This larva will remain for several weeks as part of the plankton, to later settle on the rocky bottom and develop into a juvenile specimen. Therefore, and given the morphology of this species, we are dealing with a benthic sessile species. That said, the adult specimens, firmly settled on the seabed, have the ability to detach the appendages that fix them to the substrate and look for a place on the reef more conducive to where they were. 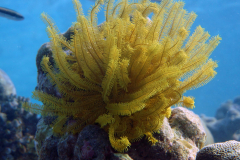 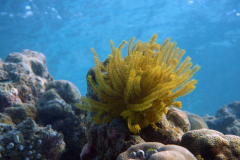 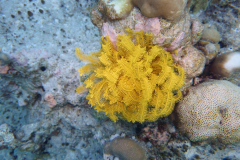 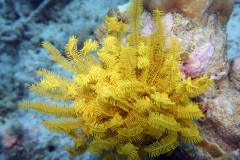 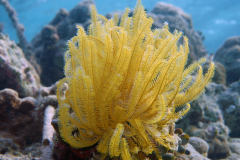