The granulated Starfish, or Choriaster granulatus, is an echinoderms echinoderm belonging to the class Asteroidea, the order Valvatidae and the family Oreasteridae. It is the only species of the genus Choriaster. We find this species of starfish in the Indian Ocean and western Pacific Ocean, from shallow waters up to 40 meters deep. It is usually associated with rocky bottoms in front of coral reefs.

The body of Choriaster granulatus, which can reach up to 30 cm in diameter, is easily recognizable by its five short but very thick arms, which end in a blunt tip. The color of this species is pale pink, with the ends of its arms somewhat lighter. The central part of the arms, on their upper side, have groups of reddish-brown papillae, which are absent at the ends of the arms.

They feed mainly on carrion, although occasionally they may feed on some algae, small invertebrates or even coral polyps. The mouth is located in the lower part of the animal, and they have a peculiar way of digesting their prey. They are capable of projecting their digestive system to the outside, thus digesting prey externally and absorbing the resulting juices.

During the reproductive season, several individuals congregate for synchronized releases of their gametes. Fertilization occurs in the current, where the larvae will form and remain for some time as part of the plankton. After some time, the larvae descend to the seabed, where they undergo metamorphosis to become juveniles. As is the case with most asterids, this species has the capacity to regenerate its body. If a part of its body is lost due to an attack by a predator on a specimen of Choriaster granulatus, it will be able to completely reconstitute the lost tissue in a period of a few months. Not only this, but if the predator ended up not feeding on the split fragment, if it contained part of the central disc of the specimen, this fragment will be able to completely regenerate an entire individual, and therefore this self-regeneration mechanism could to some extent be considered a form of unintended asexual reproduction. 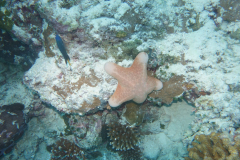 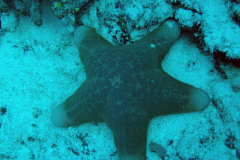