Octopus vulgaris is a species belonging to the family Octopodidae within the order Octopoda. Also known as common octopus, this species is distributed throughout the temperate and tropical waters of the world. It is a benthic species, which lives from coastal waters to the outer edge of the continental shelf, at depths between 0 meters and 200. In many habitats we can find this species, from rocky bottoms to seagrasses. Generally during the summer months, the specimens migrate to more superficial waters and in the winter months to deeper waters.

The body of Octopus vulgaris can reach a maximum length of 1.2 meters in females and 1.3 in males. The maximum recorded weight is 10 kg, although the normal specimens are 3-4 kg in weight. It has 8 arms of equal thickness, being the two dorsal arms slightly shorter. In the male specimens, the third right arm is slightly shorter, this is because this arm is modified to be used during reproduction to deposit the spermatic sacs inside the female.

It is probably one of the invertebrates with the most complex and developed nervous system at present, which gives it a capacity to adapt to the environment that is unmatched by other organisms. Cephalopods, the class to which octopuses belong, are the only invertebrates in which the so-called giant axons appear up to 1mm thick. The axons are the main extensions of the neurons and connect the body or neuronal center with the branches of the neurons arranged in the proximity of the synaptic connections. The large size of the neurons in these animals allowed Andrew Fielding Huxley in 1952 to work directly with them, manipulate them and discover how nerve impulses were transmitted through the action of sodium and potassium ion channels.

Observing Octopus vulgaris in its natural habitat will always be an enriching experience. First of all, it has an extreme capacity to adapt to the morphology of the cracks and caves where it is usually sheltered due to the cerebral plasticity that the entire nervous system gives it. In addition to this, the great mimicry they are able to achieve thanks to the chromatophores (cells with pigment) distributed along the mantle. The interesting thing about chromatophores is that they are cells subject to the directives that adjacent muscles exert on them. In other words, cephalopods, and among them especially Octopus vulgaris, can control at will the pigmentation of their bodies, and this is ultimately due again to their system of neurons because it is they who discharge electrical impulses on the muscles and stimulate them to contract or relax, charging or emptying the pigment chromatophores.

The reproduction of Octopus vulgaris occurs in the waters of the Mediterranean Sea in the months of April to May. The specimens of the African coasts have a reproductive peak during the month of September. Females are capable of laying between 120,000 and 400,000 eggs of about 2 mm. These large clutches are placed with great care by the females in crevices, caves and shallow water slits. After 1 month from the laying, in which the eggs are cared for exclusively and uninterruptedly by the female, the juveniles are born. During this period of laying incubation, the female will not feed, so many specimens end up dying after incubation. 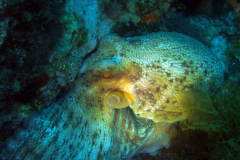 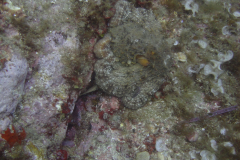 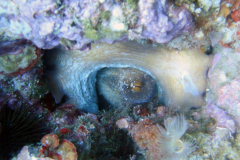