The broadclub cuttlefish or Sepia latimanus is a species belonging to the class Cephalopoda, order Sepiida and family Sepiidae. We will find it in tropical coral reef waters in the Indo-Pacific Ocean, from southern Mozambique to the waters of the Great Barrier Reef in Australia in the west-east direction, and from the northeastern Australian coasts to Japan in the north-south direction. As for the range of depths at which they live, this is a species that prefers shallow waters, and we will rarely observe it at depths greater than 30 meters.

The body of Sepia latimanus in adult individuals can reach a very considerable size, having been recorded specimens that have reached 10 kg in weight. The dorsal mantle is dark purple-brownish with numerous soft spots. The fins of the mantle are drawn by transverse lines that go somewhat into the mantle and are usually soft in color. Although the coloration we describe is the usual, this species, like the vast majority of cephalopods, has the ability to modify the coloration and even its texture, so we can observe it under other color patterns different from the one described. It has two tentacles of greater length, although sometimes they are retracted. These are called maces, and have at the end an aggregation of suckers that form a crescent. Next to the tentacular maces, we find 8 tentacles that emerge from the mouth area, and which usually have a colorful pattern of lighter transverse stripes.

Sepia latimanus is very active during the day, when they hunt their prey, including fish and crustaceans. The hunting of their prey is a moment worth seeing, since they use changing patterns of body color that they perform rhythmically and that gives the sensation that they perform to hypnotize their prey.

The reproduction of the broadclub cuttlefish occurs between January and May, when the male individuals establish and protect small territories, generally around coral heads. Through a highly ritualized courtship involving changes in coloration patterns, the male attracts a female to his territory to mate. Once the female is attracted, both individuals are positioned facing each other by the head, at which time the male transfers to the female sacs containing his waiting, called spermatophores. The female will then deposit the fertilized eggs among the branches of the coral. Once laid, the eggs have a soft consistency, but they quickly harden and cling to the coral in a very strong way. After 40 days, the fully formed juveniles will hatch. 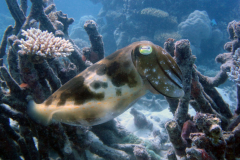 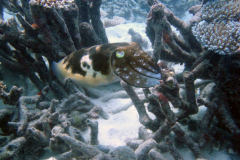 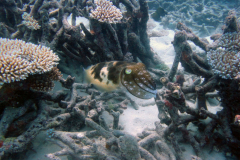 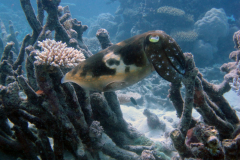 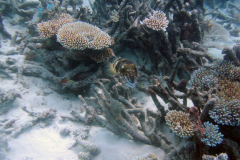