In the phylum of molluscs, within the class Cephalopoda, and in turn in the order Sepiida and family Sepiidae, we find the common cuttlefish or scientifically known as Sepia officinalis. This well-known species, which is one of the most important cephalopod species for human consumption in many countries, is found in the waters of the western Atlantic Ocean and throughout the Mediterranean Sea. Its bathymetric range is from surface waters to 200 meters depth. It is a species that is usually found associated with sandy and muddy seabeds, and is rarely observed in open waters.

Its body is wide, oval and slightly flattened dorso-ventrally, and can measure up to 50 cm in length and up to 4 kg in weight. On both sides of the mantle, it has a fin that runs along the entire body, and in the anterior part of the animal, that is, the one furthest from the tentacles and mouth, it extends slightly past the margin of the mantle. They have a small ventral siphon, with which they can propel themselves to achieve very fast movements. It has 8 arms in which it has 4 rows of suckers, as well as a pair of tentacles approximately 3 times longer than the arms, which it uses to capture prey and to reproduce in the case of male specimens. Inside the mantle, it has an internal shell, called cuttlefish. Their coloration is very variable, although they usually have a light brown color on the back, with the head full of small spots of soft color, and the area around the eyes slightly darker than the rest of the body. The fins have a thin white band on the outer edge, with small white spots that become larger at the junction between the fins and the mantle. The ventral area is usually whitish.

During the spring and summer months, Sepia officinalis migrate to shallower waters, and then in the winter and fall months descend to deeper waters. They have a light-induced behavior, whereby they bury themselves under the marine substrate during the day. They take advantage of being buried to ambush their prey. Only the first and second pair of arms protrude from the substrate, and sometimes these arms even acquire a very dark coloration, posing as lures to attract small molluscs, crabs, shrimps, polychaetes and small fish.

The reproduction of the common cuttlefish occurs during the months of April to July, and generally in shallow waters. During this time, the dorsal part of the mantle usually shows a pattern of crosshatched stripes. Reproduction involves a ritual of attraction, in which abrupt and rhythmic changes in the coloration patterns of the mantle are involved. Once the female is courted, both individuals face each other head-on, at which time the male transfers sperm-containing sacs, called spermatophores, into the female. Females can lay between 150 and 4,000 eggs of approximately 1 cm in diameter. The life expectancy of Sepia officinalis is 12 to 24 months. 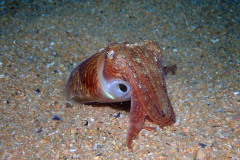 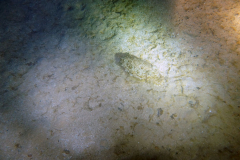 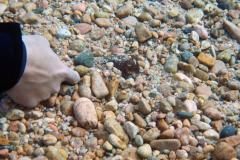 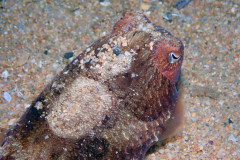 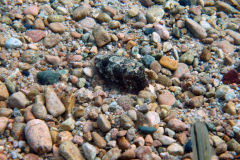 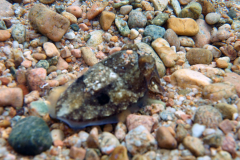 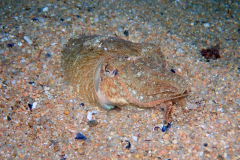 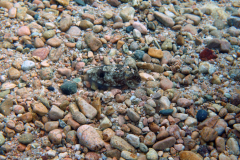