Aglaja tricolorata is a species that is included in the molluscs, in the class Gastropoda, the order Gephalaspidea and the family Aglajidae. It is an endemic species of the Mediterranean Sea that inhabits sandy/muddy bottoms up to 45 meters deep.

Of considerable size, specimens of Aglaja tricolorata up to 7 cm in length have been reported. The body is dark brown or even black in some specimens and with round white spots distributed along its entire body, although it is possible to see specimens with very few or no white spots. Inside its body it has a fragile and flattened inner shell. In the rear area of the body this species has two lobes whose edges are usually white, being the left lobe peculiar, as it extends in the form of a thin extensible filament of dark color but with white edges and can reach 4 cm in length.

It usually lives buried in the sand or mud, and therefore it is a species that will not be seen frequently. While buried in the substrate, it hunts its prey, among which we find polychaetes, nemerteans and small molluscs. It is common to observe two or more specimens of this species moving along the bottom in a row, with the cephalic region of one attached to the caudal region of the other. It is believed that this is part of the reproduction ritual, although it is still not entirely clear since the fact that they spend most of their time buried means that their study has not been very extensive. In any case, after copulation, the females lay their eggs in an elongated, circular gelatinous mass approximately 10 cm long, which is fixed to the substrate by a thin thread and contains the eggs, which are white in color. 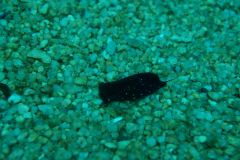 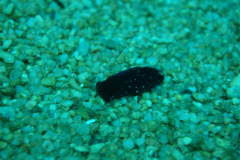 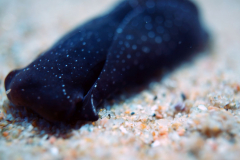 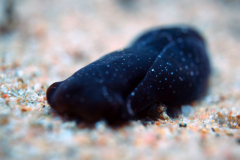 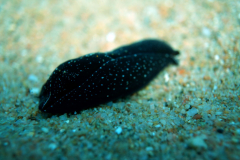 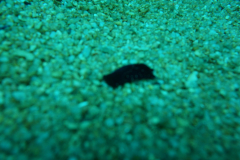