Their dark blue bodies rarely exceed 1.5 cm in length. They have a white dorsal line running down the middle from the gills to the rhinophores, sensory organs that allow them to detect changes in pressure, as well as to detect certain substances. These rhinophores are the same blue color as the rest of the body, and are relatively short in height. Another whitish line runs around the perimeter of the body, adopting a yellowish-orange coloration in the middle part of the animal. In the mouth region it has two short mouthparts.

Felimare orsinii feeds on those species of sponges in which it is found. It is able to store certain secondary metabolites (scalaradial) characteristic of these sponges, so that they provide a defensive function against potential predators given the toxic nature of these compounds.

It is a protandric hermaphrodite species, developing first the male reproductive apparatus, and then, as it deteriorates, it develops the female reproductive system. Therefore, juveniles are always male, while adults are females. It is common to observe several specimens together in the same sponge, in what is considered a reproductive act. The laying is usually done on the same sponge on which it feeds, and is done by means of a thin gelatinous cord that forms a spiral of a single turn and inside which deposits about 12-24 whitish eggs.

It is possible to confuse Felimare orsinii with Felimare tricolor, given their similarity in size and colors. To differentiate the two species, we will have to pay attention to the gill duster, completely blue in the case of Felimare orsinii. 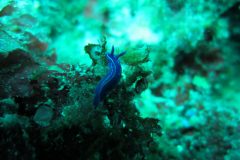 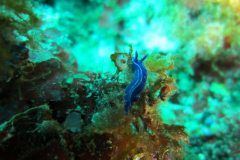 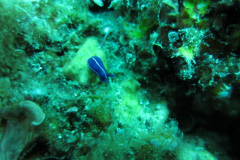