Within the taxonomic classification, we find in the class Gasteropoda, order Nudibranchia and family Flabellinidae the nudibranch Flabellina affinis, a common inhabitant of the waters between 5 and 20 meters of the Mediterranean Sea. It inhabits poorly lit areas and usually associated with hydrozoans of the genus Eudendrium. Its scientific name derives from two Latin words, 'flabellum' which means 'fan', and 'affinis' which means 'similar to'. As we will see below, the name refers to the fan-like appearance of this species.

The body has a maximum size ranging from 3.5 to 5 cm in length. Its color is pink, mauve or violet with a slightly translucent body. On the dorsal part of the body, it has 7 to 8 clusters of elongated and narrow cerata, ending in a point. These are semitransparent and light violet except for the upper third which is usually somewhat darker, and the apex which is soft. Inside the cerata there is a reddish brown stripe that is part of the digestive system of the animal. At the anterior end of the body we find two slightly flattened rhinophores with horizontal rings, i.e. they are lamellated.

The diet of Flabellina affinis is based on the Hydrozoa of the genus Eudendrium, which it ingests using its radula to scrape and isolate the polyps from the hydrozoan colonies.

Flabellina affinis is a hermaphrodite species, although it is cross-fertilized. It lays its eggs on the same colonies of Hydrozoa on which it feeds, forming undulating pinkish-violet cords that are arranged in a somewhat disorderly manner on the Hydrozoa, and inside which the eggs are very tightly packed together. 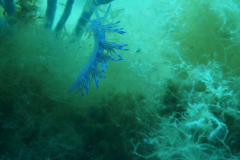 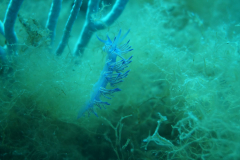 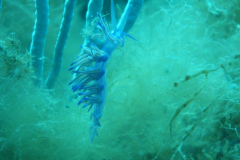