The species Harpago arthriticus, known as the arthritic spider conch is a species that belongs to the Gasteropoda class, Littorinimorpha order and Strombidae family. It is a species of marine snail that inhabits the waters of the Indian and Pacific oceans, where they live just below the low tide line, in sandy plains of coral reefs that are covered by algae and seagrasses.

Adult specimens can reach a size of 20 cm in length. Its calcareous shell has 6 long extensions along the base, which are somewhat pointed. In the posterior part of the shell, we find 3 of these extensions, the central one more or less straight, and two others on each side of the central one that arch slightly towards the central axis of the shell. In the central part of the shell is the fourth extension, the shortest of the 6 that the animal has. Finally, in the most anterior region of the shell, we find the last two extensions, one on each side and both arched towards their respective exteriors. On the dorsal part of the shell, Harpago arthriticus presents several grooves and striations formed by contiguous protuberances. The color of the shell of this animal is whitish, with numerous brown stripes and spots. On the underside of the shell of this species, we find the thick lips that border its opening. These are usually yellowish or yellowish-pink, with numerous purple or dark brown spots that form an oiled pattern.

Harpago arthriticus is a species with a marked nocturnal nature. During the day, we will find in the sandy planices the individuals peacefully resting inside the protection that give them their thick and sturdy shell. At night, and using its muscular feet, they are able to move through the sandy areas in search for food. Harpago arthriticus is a omnivorous species which will feed on any organic debris it is able to find. 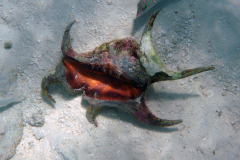 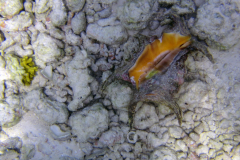 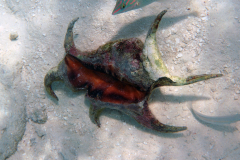 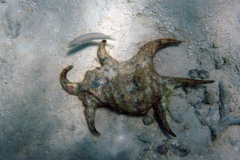 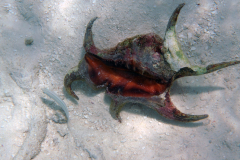 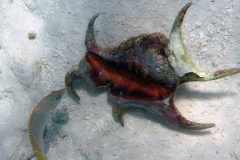