The cow snail or Peltodoris atromaculata is a member of the class Gasteropoda, order Nudibranchia and family Discodorididae, which is present in the Mediterranean Sea and adjacent regions of the Atlantic Ocean. It inhabits poorly lit places such as the entrances to caves or shady rocky walls, where they can be found at any depth up to 50 meters. It is frequently observed together with specimens of the sponges Petrosia ficiformis or Haliclona fulva.

The body of Peltodoris atromaculata is oval and can reach up to 12 cm in length. It owes its specific epithet to two Latin terms: 'ater' meaning 'black', and 'amculatus' meaning 'spotted', describing its disruptive body coloration. Throughout the entire length and width of its coat, we observe brown spots on a white background, which are larger and darker in the central part of the body. On the anterior part of the body there are two olfactory organs called rhinophores, which are white and have several lamellae. On the opposite side of the body, there are 6-9 white gill tufts of approximately 1 cm in length. Both the gill tufts and rhinophores are retractable, and will hide them when they feel the slightest threat. The foot of this species is not usually seen as it is completely covered by the mantle, but in any case it is very narrow and protrudes slightly below the mantle in the rear area of the animal, thus forming a kind of rounded tail. The consistency of Peltodoris atromaculata is leathery, due to spicules present on the mantle and numerous small conical protuberances arranged all over the dorsal part of the animal.

It feeds exclusively on the sponge Petrosia ficiformis, from which it is able to isolate certain compounds, such as petroformins, which it stores in its tissue, making it toxic to potential predators.

Peltodoris atromaculata is a simultaneous hermaphrodite with cross fertilization. It lays its eggs during the months of May to August, creating a gelatinous ribbon up to 15 mm high in which it deposits hundreds of thousands of white eggs. The ribbon is wound in a spiral of 3-4 turns with a diameter of 4-5 cm. After a few days, the larvae hatch and spend a period of time as part of the plankton and then descend to the seabed.

It has been described that certain secondary metabolites generated by Peltodoris atromaculata after digestion of the sponges on which it feeds, have been shown to inhibit the growth of certain leukemia tumor cells (petroformynes) or melanoma cells (hydroxyl-dehydroisofluvinol). 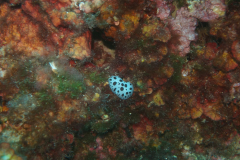 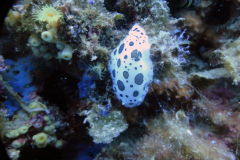 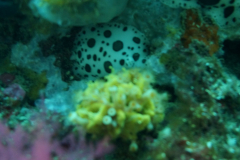 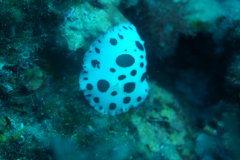 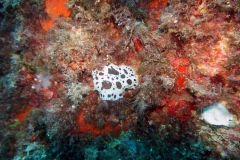 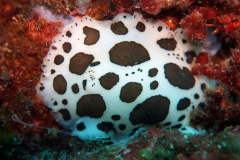 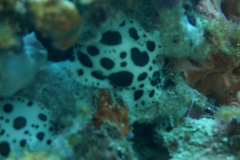 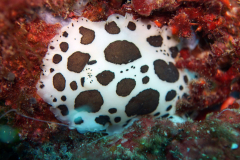 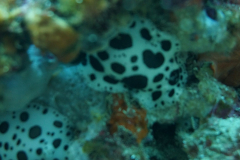 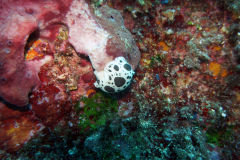