Thuridilla hopei is a species endemic to the Mediterranean Sea, belonging to the class Gasteropoda, order Sacoglossa and family Plakobranchidae. It inhabits from shallow waters to depths of 35 meters, where we will find it moving on hard substrates, well lit and with the presence of algae of the genus Cystoseira.

Its body is elongated (up to 2 cm long) and more or less cylindrical, with an appendage or parapodium protruding from each side. This parapodium is usually retracted when the animal is moving along the seabed. The general color is dark brown to bluish, with a bright orange band at the margin of the parapodium. On the outside of the parapodia as well as on the head, it has white, yellow or light blue stripes and spots, while the inner surface of the parapodium is iridescent blue. In the cephalic region there are 2 sensory organs called rhinophores, which are elongated and may be rolled up on themselves. The most dorsal part of the rhinophores has a white color that forms a 'Y' at the base of the rhinophores. At the base of the rhinophores we find two black spots, which are eye spots with which they are able to detect light levels. Continuing in the cephalic region, we also find an orange lip next to the mouth. Under the parapodia we find the animal's foot, which is narrow with rounded edges. There is a certain degree of variability in coloration among the different specimens of this species. There are studies that indicate that the coloration of the specimens depends on the depth at which they live, being more bluish colors and lacking white spots in specimens that live at greater depths, while in shallow waters they present discontinuous dots and stripes.

The diet of Thuridilla hopei consists exclusively of algae of the genus Caulerpa, Cladophora and Derbesia, from which it not only obtains nutrients, but is able to incorporate into its tissues the chloroplasts of these algae in a fully functional way.

Thuridilla hopei is a hermaphroditic species with cross reproduction. Two specimens reproduce by head to head contact on their right sides between two individuals, whereby the reproductive tracts of both specimens contact each other producing an exchange of sperm. The subsequent laying of eggs will be attached to the base of the algae on which it feeds, forming a flat spiral inside which are present the red eggs. These eggs, as the embryos develop, lose their color. Twenty days after laying, the larvae hatch.

Various extracts made from specimens of this species have been shown to have antimicrobial, anti-inflammatory and anti-arrhythmic activities. 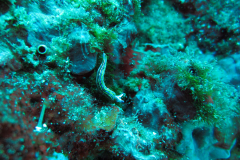