It is a marine worm of the annelid group, with a wide geographical distribution. Generally we will not observe the animal completely, but usually only the trunk is visible, which we will see coming out of the rocks or small cavities, reaching the meter and a half long and ending in a wavy bifurcation. The rest of the body is made up of a cylindrical section, which is usually kept inside the rocky cavity at all times. Whenever we see a Bonellia viridis, it is a female, which is characterized by its green to black coloring. Its body is circular, although due to its enormous contractility, we will mostly observe it extended. It feeds mainly on detritus, although using a poison located in its skin, it is capable of paralyzing small invertebrates. There are scientific studies that have successfully tested the anti-tumor properties of this poison, known as bonelina.

Unlike females, male specimens barely reach 3 mm in length and lack a tube. Male individuals live inside the body of females, where they adhere to the pharynx or uterus. It is common to find more than one male individual in the body of the female. Up to almost a hundred male individuals can be found. The reproduction of this species is sexual, fertilizing the male to the female. The larvae are expelled into the stream without having their sex established yet. Depending on the location where they are finally deposited, they will develop one sex or the other. If the larva is deposited on a female specimen, the larva will develop as a male individual, while if it is deposited on an area where there are no females in the vicinity, the sex it will develop will be the female.

Bonellia viridis is a species that everything and be able to observe it during the day, are more active at night, during which it scans the sandy and/or rocky bottom in search of its food. 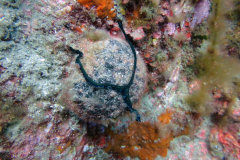 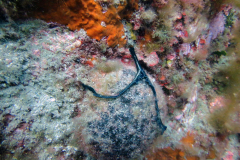 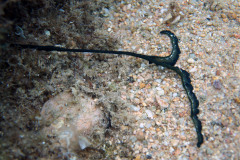