Ctenactis echinata is a cnidarian belonging to the class Anthozoa, the order Scleractinia, and the family Fungiidae. This solitary coral species inhabits the Indian and Pacific Oceans, from the waters of the Red Sea to Samoa, China, Japan, Indonesia and northern Australia. It is a very abundant species in rocky areas and coral slopes and even occasionally in sandy areas, always in shallow waters up to 20 meters deep.

It is a coral with a hard calcium carbonate skeleton, which generally adopts elongated or slightly circular shapes that rarely exceed 25 cm, with a convex profile, in which the most central part of the specimen is thicker than the more peripheral parts. The color of the skeleton of this species is generally pale brown, although there may be specimens with other colorations such as yellow, green and even blue. Although specimens of a certain size are free-living, in the sense that they are not attached to the seabed, the early stages of development of this species are strongly attached to the seabed.

It has a central groove that extends along most of its length, and in which we find a single mouth opening. Both the upper and lower surface of Ctenactis echinata are very rough, this is due to the numerous costal denticles as well as septa of its skeleton that are arranged radially starting from the mouth opening. As for the septa, there are two types, the primary ones, which are thick and have denticles, and the secondary ones, located between primary septa, which are much smaller in size.

As for the feeding of Ctenactis echinata, like many species of corals, it has inside its soft tissues, zooxanthellae algae in a symbiotic relationship. These algae obtain protection and a privileged place of access to light, obtaining the coral as a reward the by-products of photosynthesis of zooxanthellae in the form of organic compounds. Not only does it receive this reward of organic compounds, but also as a by-product of photosynthesis, oxygen is generated, which the coral takes advantage of to breathe. This food due to zooxanthellae accounts for approximately 70-95% of its requirements. The rest is obtained by capturing plankton and organic matter from the water thanks to the tentacles of the polyp. 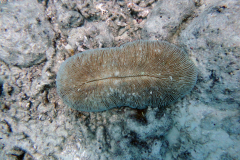