Sarcophyton spp is a genus that groups 80 different species, which are relatively difficult to differentiate at a glance between them, due to their high level of similarity between species. They are known under various common names such as leather coral, skin coral or mushroom coral. As a group of species, Sarcophyton spp are classified within the class Anthozoa, the order Alcyonacea and the family Alcyoniidae. The name of the genus derives from two Greek words, on the one hand 'sarkos' which means 'flesh', and on the other hand 'phyton' which means 'creature', refering to a fleshy creature as they are part of the so-called soft corals, so called because unlike hard corals, they do not generate a calcium carbonate skeleton and therefore are not reef generators. They grow in surface waters at the edges of reefs and lagoons, on the hard substrates of the Indian and Pacific Oceans.

Sarcophyton spp form colonies of mushroom-shaped polyps, which have an elongated and often short foot on which is superimposed the surface where the polyps lie, called the polyparium or capitulum. There are two types of polyps, some that are longer (up to 4 cm long) and very retractile, called autozooids; while the other type of polyps, called siphozonoids, are much smaller and more numerous, located between the autozooids. As for size and coloration, they are variable among the different species, but we find specimens with colors ranging from pink, brown, yellow, green and sporadically blue; and with sizes that can reach 60 cm in diameter.

As a peculiar characteristic of this group of species, Sarcophyton spp is capable of shedding the outermost layer of its body with certain periodicity, hence the name skin coral. When molting the skin, the specimen folds all its polyps for several days in which a thin layer of skin is shed. This strategy prevents sediments, bacteria, algae or other organisms from growing on them.

The feeding of Sarcophyton spp. is mainly based on the photosynthetic activity carried out by the zooxanthellae algae inside its tissues. The algae obtain protection and a privileged place of access to light, obtaining the coral as a reward the by-products of photosynthesis of zooxanthellae in the form of organic compounds. Not only does it receive this reward of organic compounds, but also as a by-product of photosynthesis, oxygen is generated, which the coral takes advantage of to breathe. This feeding due to the zooxanthellae represents approximately 70-95% of its requirements and is complemented by the capture of phytoplankton and organic particles by means of the tentacles of its polyps. We will find during the night hours, the polyps fully extended in the specimens of Sarcophyton spp, as this is the time when they take the opportunity to capture their prey that are dragged by the currents.

The reproduction of Sarcophyton spp can be asexual by means of shoots or cuttings formed from the original specimen; or they can reproduce sexually by external fertilization with a planktonic larval stage that undergoes a metamorphosis to descend to the bottom and generate a new colony. Sexual maturity usually takes time, being reproductively active between 6-8 years in male colonies, and 8-10 years in female colonies. 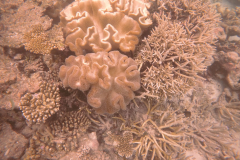 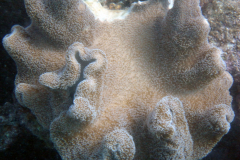 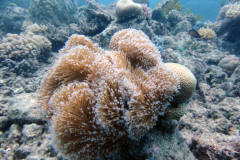 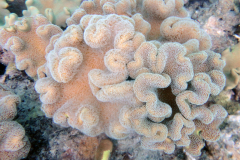 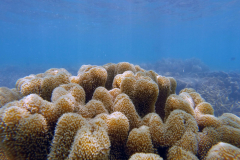 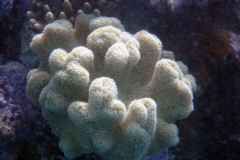 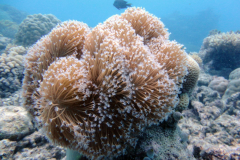