Ophioderma longicaudum or also known as smooth brittle star, is a brittle stars of the family Ophiodermatidae within the order Ophiodermatidae. It inhabits coastal waters up to 70 meters deep, usually in crevices or under rocks, although occasionally it is also possible to observe them in Posidonia oceanica meadows. The habitat in which we will find this species is strongly marked by the great negative phototropism they have. Therefore, they shy away from light, and look for shady, if not completely dark places. This species is present in the Mediterranean Sea (western area and Adriatic Sea) as well as in the eastern Atlantic Ocean.

The body of Ophioderma longicaudum can reach up to 22 cm in diameter and is formed by a pentagon-shaped central disk from which at each of the vertices emerge the long and slender arms. The name of its genus (Ophioderama) literally means snake skin, and the appearance of its skin is reminiscent of snakes. The color of the body of Ophioderma longicaudum is brown to reddish on the dorsal side, and yellow-grayish on the ventral side. Along the arms of the specimen, it has alternating light and darker bands.

The Ophioderma longicaudum is considered a scavenger species since it feeds on decaying matter. However, occasionally it also feeds on sea urchins, molluscs and crustaceans. It is a very voracious species, mostly active at night, which moves surprisingly fast along the seabed towards its prey, which it can detect at considerable distances considering its size.

The reproduction of the ophiura Ophioderma longicaudum is sexual and occurs during the months of May to June. During this period, males and females release sperm and eggs into the water, to form a larva after fertilization, which will spend several weeks as part of the plankton. After these weeks, the larva is deposited on the seabed to undergo a process of metamorphosis, giving rise to a juvenile specimen. 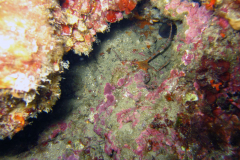