Within the colloquially known as sea cucumbers, we find Holothuria edulis, a species of echinoderm of the class Holothuroidea, the order Holothuriida and the family Holothuriidae. This species is present in the tropical waters of the Indo-Pacific, from the coasts of the Red Sea, the East African coasts, to Sri Lanka, Japan, China, Indonesia, the Philippines and northern Australia. It inhabits shallow waters up to 20 meters deep with sandy or muddy bottoms, although it is also possible to find it on reef flats, slopes or seagrass beds.

The body of Holothuria edulis, which can reach lengths of up to 30 cm, is cylindrical, with rounded ends, soft and flexible and has a soft skin. The body is covered with longitudinal rows of small tubular feet that can be retracted leaving behind small holes on the surface of the animal. At one end of the body we find a mouth, which is surrounded by tentacles formed by 20 tubular feet that the specimen uses to capture part of its food. As for the color of the body, it is usually reddish black on the upper part, and mauve pink on the lower surface.

Although we can observe specimens of Holothuria edulis during the day, this species is much more active at night. Generally, and whenever possible, we will find specimens hiding under rocks, ledges or corals during daylight hours. They have a very slow locomotion capacity, which they obtain by the peristaltic action of their body wall.

Regarding the feeding of Holothuria edulis, we can say that it is a detrivorous species, which feeds by ingesting sand and detritus accumulated on the seabed. From the sand ingested, it is able to isolate any organic matter present, on which to feed. The matter that it is not possible to digest is expelled to the outside, which leaves a trail as the animal moves along the bottom.

It has separate sexes, and its individuals are able to reproduce throughout the year. They release their gametes into the current for fertilization to occur and the dominant currents spread the formed planktonic larvae. After a period of time, this larva undergoes a metamorphosis, descending to the bottom as a juvenile specimen. Another form of reproduction of this species, which is a widespread trait among the asterids, but not so much among the holothurids, is asexual reproduction by means of a splitting of an individual into two halves. Each of the halves is capable of regenerating the missing part, thus giving rise to two genetically identical individuals.

There are certain countries in Southeast Asia, including China and Indonesia, where this species is consumed in dried form. 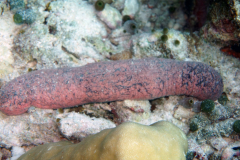 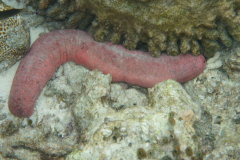