Holothuria forskali or known as black sea cucumber, is a species of the family Holothuriidae, included in the order Holothuriida, and within the class Holothuroidea. This species is distributed throughout the Mediterranean Sea, as well as along the eastern coasts of the Atlantic Ocean. It usually inhabits the shallow waters of the coast, up to depths of 50 meters and in areas of rocky and/or sandy substrate, as well as algal meadows such as Posidonia oceanica.

They have a cylindrical tubular body up to 25 cm long and 5 cm wide, in which the ventral part is slightly flattened, and has numerous ambulacral feet organized in 3 or 4 rows, although irregularly distributed. These ambulacral feet are equipped with tiny suction cups. At one end of the body we find the mouth, around which we find 20 black or yellow tentacles with branches. At the opposite end of the body is the anal opening. The coloration of the body of Holothuria forskali is dorsally blackish, while ventrally the color is brownish to yellowish, often with frequent darker spots. The dorsal surface is covered with conical papillae whose apices are soft in color. This coloration pattern is characteristic of adult specimens. Juveniles have a yellowish coloration that turns to black as they grow.

It is preferable to keep a certain distance and not scare the animal because as a defense mechanism it has organs called Cuvier's glands that secrete thin, sticky filaments.

Holothuria forskali feeds on microorganisms that it captures after ingesting sand from the seabed. Once the sand passes through its digestive tract, and after extracting all the organic matter present in the substrate, the non-digestible matter is expelled in the form of sandy cords enveloped by a thin layer of intestinal mucus. These strands of sand that the specimens leave behind will allow us to recreate the trajectory of the specimen during its last hours.

The black sea cucumber has separate sexes, and there is no external feature to differentiate the females from the males. During the late summer months, this species migrates to shallower waters to reproduce. The specimens stand up on themselves to release their gametes and maximize the dispersal of the larvae formed when the gametes are fertilized and transported by the currents. The larvae form part of the zooplankton and after several molts descend to the seabed as juveniles. 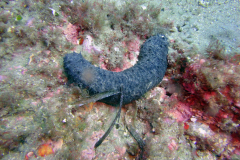