The Holothuria impatiens is a sea cucumber with a slender and wrinkled body belonging to the family Holothuriidae, included in the order Holothuriida, and within the class Holothuroidea. This species is found over a very wide geographic range that includes the Indo-Pacific Ocean, as well as the tropical western Atlantic (Caribbean Sea). It usually lives on the crevices and hollows of reefs up to 30 meters deep, where it seeks refuge during the day.

The body of Holothuria impatiens can reach up to 25 cm in length, and is narrower at the end where it has the mouth than at the opposite end, and therefore having a slightly conical shape. At the narrower end, we find the mouth opening oriented downwards. This mouth opening is surrounded by 20 short, white tentacles, which the specimen uses to capture its food, and which are generally not observed because they are completely retracted. There are also 5 or more dark gray or brown stripes located at the narrowest end of its body. Of firm consistency and rough appearance, the body of Holothuria impatiens is covered by conical protuberances of pointed appearance. The body color varies between gray, brown and reddish.

This solitary animal feeds during the night on deposits that form on the seafloor. After ingesting the substrate, and digesting these deposits with organic matter, the rest of the non-digestible matter is expelled in the form of sandy strands enveloped by a thin layer of intestinal mucus. These strands of sand that the specimens leave behind will allow us to recreate the trajectory of the specimen during the last hours.

The reproduction of Holothuria impatiens occurs through the simultaneous release of eggs and sperm into the water, where fertilization occurs and a larva is formed. This larva will remain part of the zooplankton for approximately 2 months, undergoing various transformations along the way until a juvenile specimen is generated and deposited on the marine substrate. It is estimated that the life expectancy of this species is 8 years.

It can be confused with Holothuria hilla, although coloration and patterning are used to distinguish between these species. Holothuria impatiens has a much more variable coloration, and the consistency of its body is much rougher compared to the soft body of Holothuria hilla. 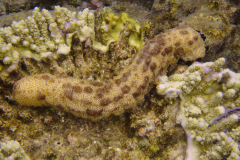