The Holothuria nobilis is a black sea cucumber belonging to the family Holothuriidae, included in the order Holothuriida and the class Holothuroidea. It inhabits waters up to 40 meters deep in the surrounding plains of coral reefs, as well as coral slopes and seagrass beds. Its geographical distribution is quite extensive, and it can be found in the tropical waters of both the Indian and Pacific Oceans.

The body of this sea cucumber has a suboval section, of firm and robust consistency, presenting a certain degree of arching in the dorsal part of its body, while the ventral part is completely flat. The back is dark brown or black, with the ventral part of a lighter color and sometimes grayish. The mouth opening in this species is found at one end of the body, and is surrounded by 2 rows of black papillae as well as 20 robust-looking gray tentacles. It is common that these tentacles surrounding the mouth are not visible, as they are completely retracted during daylight hours when the specimen is not feeding. On the lateral part of its back we will observe 2 rows of black papillae, although sometimes these papillae will go unnoticed since Holothuria nobilis has the habit of covering its back with a thin layer of sand. On both sides of its body, and located in a position between the dorsal and ventral, we find between 6 and 8 wide protuberances. It can reach sizes of up to 55 cm long, although the most common is to observe specimens up to 35 cm long.

Holothuria nobilis has Cuvier's glands and tubes, although it is rare for this species to expel them when it feels threatened. In any case, the Cuvier's tubes of this species are transparent in color.

This solitary, slow-moving animal feeds during the night on the deposits that form on the seafloor. After ingesting the substrate, and digesting these deposits with organic matter, the rest of the non-digestible matter is expelled in the form of sandy cords enveloped by a thin layer of intestinal mucus. These strands of sand that the specimens leave behind will allow us to recreate the trajectory of the specimen during the last hours. 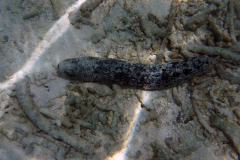 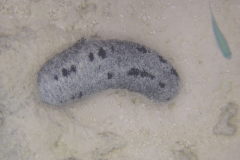 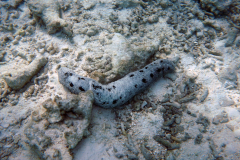