Within the classification of echinoderms, we find in the class Holothuroidea, the order Holothuriida and the family Holothuriidae the sea cucumber species Holothuria tubulosa. It is a species that usually lives in waters up to 100 meters deep in temperate regions of the eastern Atlantic Ocean and the Mediterranean Sea. Its habitat includes sandy/muddy regions as well as Posidonia oceanica seagrass beds.

Its body can reach up to 45 cm in length and 6 cm in diameter, being almost cylindrical in section except for the ventral part which is slightly flattened. The ventral part of the body of Holothuria tubulosa has 3 rows of ambulacral feet. The consistency of the body is leathery and hard, with brownish shades in which stand out numerous cone-shaped papillae that project as spines of darker colors than the rest of its body. The mouth is located at one end of its body, and has a band of short and flattened tentacles surrounding it.

This solitary, slow-moving animal feeds during the night on the deposits that form on the seafloor. After ingesting the substrate, and digesting these deposits with organic matter, the rest of the non-digestible matter is expelled in the form of sandy strands enveloped by a thin layer of intestinal mucus. These strands of sand that the specimens leave behind will allow us to recreate the trajectory of the specimen during the last hours.

Holothuria tubulosa is a species that has separate sexes, with no external distinction between males and females. Reproduction occurs when two conditions are given, on the one hand the coincidence with a full moon, and on the other hand the water temperature to be close to 25°C. When these conditions are met, the males release a whitish liquid into the currents, while the females also release a more viscous fluid into the currents. These gamete releases can last up to 30 minutes. After dispersal of the gametes with the currents, fertilization occurs, and after 24 hours a larva hatches. This larva will form part of the zooplankton feeding on phytoplankton, until after several stages of its development, it undergoes a metamorphosis event generating a juvenile individual that settles on the seabed. 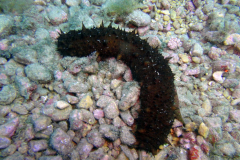 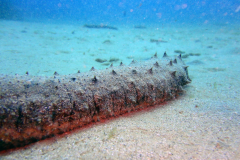 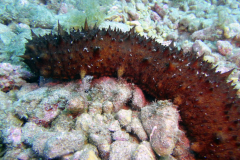 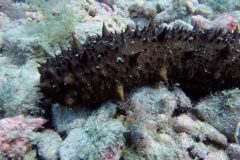