Pearsonothuria graeffei is a species of the class of holoturids or Sea Cucumbers, and is widely distributed throughout the coral reefs of tropical Indo-Pacific waters, except for the Persian Gulf region and Hawaii. It is generally rare to find individuals of this species at depths greater than 25 meters. As for the sizes reached by this sea cucumber, the largest recorded are a length of 45 cm and a weight of 1.3 kg, although the most common is to find specimens that do not exceed 35 cm and 0.7 kg in weight.

The body of Pearsonothuria graeffei is practically cylindrical, with the ventral area slightly flattened. Its mouth, located ventrally at one end of the animal, is surrounded by a ring of up to 25 black tentacles on top, and white on the inside, which it uses to ingest sediment and small animals present in the sand. At the opposite end of the mouth, we find the anus in a dorsal position.

The color of the adults is white, with large brown spots and numerous black dots, along with small spiny bumps. On the contrary, juvenile individuals are brightly colored, being white and blue or black, with some large yellow projections, which resemble thorns. This coloration makes them very similar to the toxic nudibranch Phyllidia varicosa. It is therefore, the coloration of the juvenile specimens of Pearsonothuria graeffei, a way to pose as a toxic species, and thus avoid possible interest from predators. As the juvenile specimens grow, the mimicry with Phyllidia varicosa loses its effectiveness, and the defensive strategy goes through a large size on the one hand, and a slight toxicity through the production of toxic compounds on the other.

Pearsonothuria graeffei has separate sexes. Females and males release their gametes into the water, where fertilization will occur to form a planktonic larva (auricularia). Later this larva will develop to form the doliolaria, a stage in which the larva adopts a barrel shape, to later perform a metamorphosis towards a juvenile specimen of Pearsonothuria graeffei. 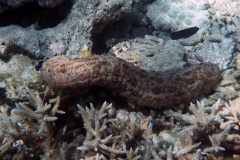 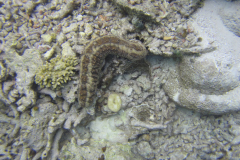 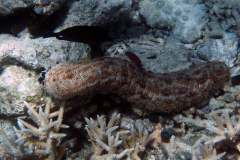