Stichopus chloronotus is a species of echinoderm belonging to the class Holothuroidea, the order Synallactida and the family Stichopodidae. This sea cucumber is found in the waters of the Indian and Pacific Oceans, from the Red Sea and East African coasts, to Madagascar, Seychelles, Comoros, Reunion, Australia, Indonesia, China, Japan, Guam, Fiji, Tonga and Samoa. It inhabits surface waters up to 15 meters of coral reefs, although it is also possible to find this species in gravel areas.

It is an easily identifiable species due to its characteristic very dark green color present homogeneously in all individuals, with numerous conical extensions forming longitudinal rows on its body whose apices are yellow or reddish. These prolongations are larger on the flanks. The body of Stichopus chloronotus can reach up to 25 cm in length, being almost square in section.

As a species, they tend to form groups of individuals that sometimes congregate a large number of specimens in the same area. They are predominantly nocturnal, with a tendency to be more active during dusk and dawn. Juveniles tend to inhabit shallower waters.

As for the feeding of Stichopus chloronotus, it is a predominantly detrivorous species, which filters the marine sediment using its tentacles to engulf the sediment and filter from it those organic particles present, leaving behind a string of sand already processed.

It is a dioecious species, that is to say that it has separate sexes, and there is no external differentiation to distinguish between male and female specimens. They can reproduce asexually and/or sexually. Asexual reproduction consists of the fission of an individual in two parts, each part regenerating the missing part, and generating as a result two specimens completely identical to the initial one. Sexual reproduction can occur during two times of the year, during November and January. During these times, the specimens stand up on themselves, in order to release their gametes and maximize the dispersion of the larvae formed when the gametes are fertilized and transported by the currents. The larvae form part of the zooplankton and after several molts descend to the seabed as juveniles. 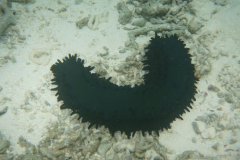 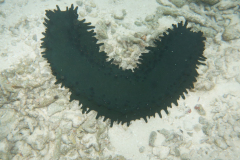