Thelenota ananas is a species of echinoderm belonging to the class Holothuroidea, the order Synallactida, and the family Stichopodidae. It is a common species in the waters of the Indo-Pacific, and can be found from the Red Sea and the East African coasts, to the archipelago of Hawaii and Polynesia. It can be found in crystal clear waters, on rocky and sandy bottoms of lagoons or near reefs, in both cases up to depths of 30 meters.

This sea cucumber has a reddish-brown colored body, with a multitude of reddish-orange branched protuberances grouped in 2 or 3 rows. It is a species that can reach very considerable dimensions, up to 60-75 cm long, and specimens weighing up to 6 kg have been recorded. Its body has a square cross section. The body is firm, rigid and slightly flattened ventrally. The ventral part is brownish-pink in color. At one end of the cylindrical body of Thelenota ananas we find the ventral mouth opening, which is surrounded by a circle of conical papillae, as well as 20 long brown tentacles, although these are usually completely retracted.

Unlike other holothurid species, Thelenota ananas does not have Cuvier's tubes that it can use as a defense mechanism against possible aggressions.

The diet of this sea cucumber is based on calcareous algae of the genus Halmeda.

The reproduction of Thelenota ananas specimens occurs during the summer months of the southern hemisphere, from January to March.

Thelenota ananas is an endangered species according to IUCN, since it is a species appreciated for its culinary value in Southeast Asian countries and has been exploited commercially in a very intense way. 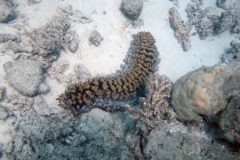