Known as crown of thorns, this starfish (Acanthaster planci) is known to feed almost exclusively on hard coral polyps. It has been documented that a single Acanthaster planci is capable of destroying an area of 8 km2 over the course of a year. In regions where there is an overpopulation of this species, it is a threat to the reef, although in balanced habitats it poses no threat to the reef. Acanthaster planci is a species that is usually solitary. Its coloration is dark brown, although it can vary between red, orange or purple with red or yellow spine tips and beige ambulatory feet. In general, the color of the specimen depends on the diet of the individual, being able to change of color a same individual throughout its life. It has between 8 and 21 radial arms that come out of a central disc. The general size of the body is between 25 and 35 cm in diameter, although certain documented specimens have exceeded these figures, reaching 70-80 cm in diameter.

As a curiosity, the tips of the arms have photosensitive cells, which allow them to distinguish between shadows and light. Their whole body is covered with thorns of about 4 or 5 cm high, which provide them with an effective defense against possible predators. The thorns are connected to glands that secrete toxins, so contact with their thorns is very painful. It is a species with separate sexes and external fertilization. Males and females release millions of their gametes into the seawater stream, where fertilization occurs and they become part of the plankton. Reproduction occurs in the months of May to August in the northern hemisphere, while in the south it occurs between November and February. Their diet, as previously mentioned, consists of hard coral polyps, mainly Acroporas, Pavona, Pocillopora or Porites. Few predators are known, due to the effectiveness of their spines. However, the giant snail Charonia tritonis as well as fishes of the Tetraodontiformes family (Balistoides vididescens, Pseudobalistes flavimarginatus and Arothron hispidus), the fire worm (Pherecardia striata) or the harlequin shrimp (Hymenocerca picta) are among the predators of this species. 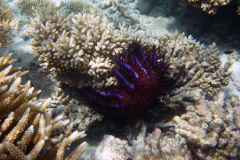