We are probably facing one of the most striking stars of the Mediterranean Sea and the eastern waters of the Atlantic Ocean. Echinaster sepositus is classified within the animal kingdom, in the class Asteroidea, the order Spinulosida and the family Echinasteridae. It lives at depths of up to 120 meters, in a multitude of habitats, among which we highlight the rocky, sandy, muddy bottoms or seagrass meadows (especially Posidonia oceanica). It is distributed on the Mediterranean infralittoral.

The body of Echinaster sepositus, like most sea stars, has a radial symmetry with 5 vertices. These vertices correspond to 5 arms, although we can sporadically observe some specimens with up to 7 arms. The arms arise from a small central disk, being cylindrical, slender and long. In total, the diameter that this species can reach is usually 20 cm, although there are reported specimens somewhat larger. As for the color of the body, it is bright red with a somewhat rough texture. In the upper part of the body, and along its 5 arms, we find small openings evenly spaced through which the specimen extends its gills. These gills are red, with a more intense color than the body itself. On the underside, we find the mouth in the center of the central disc, and the coloration is usually somewhat less intense than the dorsal part. We also find on the aboral part and running longitudinally along the arms, several rows of ambulacral feet that provide the species with a means of movement, slow and somewhat limited.

This species of starfish has separate sexes, with no external distinction between them. Fertilization is external, after the specimens release their gametes into the currents. The eggs are first expelled by the females, and then the males raise their arms, releasing the spermatozoa. The reproductive peak usually occurs between spring and autumn. The fruit of fertilization is a reddish egg that will develop until the moment of hatching, when a juvenile star emerges from it, so therefore they have a direct development without going through a larval stage.

One of the peculiar characteristics of the group of the asterids, and therefore also of the species Echinaster sepositus, is its capacity for regeneration. When it loses a part of its body, which can occur due to an attack by a predator or due to a storm, the star will regenerate the lost arm, and the lost arm will generate the remaining ones, giving rise to a new specimen genetically identical to the parent. This is due to the presence of totipotent cells capable of specializing in any other type of starfish cell. The only condition for this phenomenon to occur is that in the cleaved fragment there is a fragment of the central disc, since it is there where these totipotent cells with the capacity to regenerate the individual are located. Therefore, this mechanism of self-regeneration could to some extent be considered a form of unintended asexual reproduction.

In the section of curiosities, we emphasize that several extracts have been made from specimens of this species, demonstrating antibacterial activities against pathogens of great importance to humans such as Staphylococcus aureus, Pseudomonas aeruginosa or Candida famata. 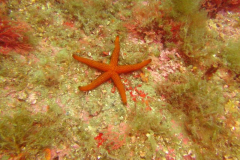 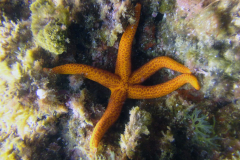 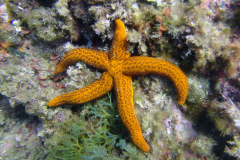