The starfish Fromia nodosa inhabits the sandy and rocky bottoms of lagoons and reefs located in shallow waters (from shallow water to 50 meters deep) of the western Indian Ocean, from the Maldives to the Seychelles and Sri Lanka. This species is classified within the class Asteroidea, the order Valvatidae and the family Goniasteridae.

It has a pentaradial symmetry, in which its flattened body is formed by a flattened central disk, from which emerge forming a pentagon, its 5 long and slender arms. The maximum size usually reached by this species is between 7 and 10 cm in diameter. Its body is dark red or orange, with cream or yellowish plates on its extremities, being characteristic of Fromia nodosa the presence of a row of these plates that runs along the center of each of the arms.

The feeding of Fromia nodosa is detrivorous, although occasionally we can also observe it feeding on certain species of molluscs and even some crustaceans or sponges.

Being a hermaphrodite species, the specimens of Fromia nodosa have the ability to release both male and female gametes into the currents, leaving them at the mercy of the currents. It is at this moment when fertilization occurs, giving rise to the formation of a larva that will spend some time as part of the plankton. After a few weeks, this larva will settle to the bottom of the sea, previously undergoing a metamorphosis process by which a juvenile specimen is generated.

One of the peculiar characteristics of the group of asterids, and therefore also of the species Fromia nodosa, is its ability to regenerate. When a part of its body is lost, which can occur due to an attack by a predator or due to stormy weather, the star will regenerate the lost arm, and the lost arm will generate the remaining ones, giving rise to a new specimen genetically identical to the parent. This is due to the presence of totipotent cells capable of specializing in any other type of starfish cell. The only condition for this phenomenon to occur is that in the cleaved fragment there is a fragment of the central disc, since it is there where these totipotent cells with the capacity to regenerate the individual are located. Therefore, this mechanism of self-regeneration could to some extent be considered a form of unintended asexual reproduction. 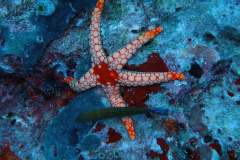 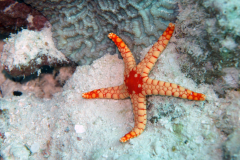 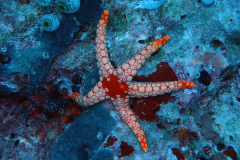