The star Linckia guildingi, known as common comet star, inhabits the shallow tropical waters of the Pacific, Indian and Atlantic oceans, being very frequent in the Caribbean Sea. It is a species of echinoderm belonging to the class Asteroidea, the order Valvatida and the family Ophidiasteridae.

It has a small central disk, from which emerge its 5 cylindrical, long and slender arms, although it is not uncommon to observe individuals with 4 or 6 arms. Although the appearance of its body gives the impression of being smooth, the surface of the dorsal surface of these animals is rough. The coloration of Linckia guildingi is very variable, predominantly greenish in color, although brown, blue and even pale red individuals are possible.

The diet of Linckia guildingi consists of algae and small microorganisms that occasionally supplemented with carrion found on the seabed. They are able to exvert their stomach to the outside to digest their prey externally, subsequently absorbing the juices of their prey.

This species of starfish has the ability to self-amputate one of its arms in situations where it feels threatened. With this, it aims to confuse the attacker so that he focuses on the amputated arm and not on the rest of the body of Linckia guildingi. This is not a problem for the specimen, since they have a high degree of self-regeneration and after a few months, the specimen that amputated itself will have its lost arm fully regenerated and functional. Not only this, but the lost arm itself, if not engulfed by the attacker, will be able to regenerate the remaining arms, giving rise to a new specimen genetically identical to the parent. This is due to the presence of totipotent cells capable of specializing in any other type of starfish cell. The only condition for this phenomenon to occur is that in the cleaved fragment there is a fragment of the central disc, since it is there where these totipotent cells with the capacity to regenerate the individual are located. Therefore, this mechanism of self-regeneration could to some extent be considered a form of unintended asexual reproduction. 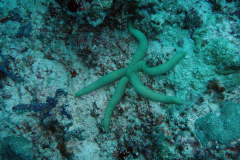