Although many people confuse flatworms (also known as turbellarians or planarians) with nudibranchs, the species we are dealing with today, Prostheceraeus roseus, is not a nudibranch but a flatworm. This species inhabits the rocky bottoms of the Mediterranean Sea, usually over specimens of algae, sponges, bryozoans or tunicates. It is possible to find specimens of this species at depths between 5 and 50 meters and generally in rather poorly lit areas.

Its body is oval and very flattened dorsoventrally, reaching 2-3 cm in maximum length. In the head area we can distinguish two tentacles formed by two folds of the edge of the body, at the base of which if we pay attention we will observe small black ocelli. The color of the body is pink with a central longitudinal white stripe and between 10 and 12 thin white lines that run longitudinally along the body. The dorsal part of the body is completely smooth and has no papillae; and the ventral part is whitish, although it is rarely visible. It is possible to confuse specimens of Prostheceraeus giesbrechtii with the species Prostheceraeus roseus because the former has a bluish coloration that can turn red/reddish if it is not artificially illuminated due to the loss of red colors with the depth of the water.

The reproduction of Prostheceraeus roseus occurs during the summer months. It is a hermaphrodite species with cross-fertilization, although they can also reproduce by fragmentation due to the very high degree of self-regeneration that flatworms possess. 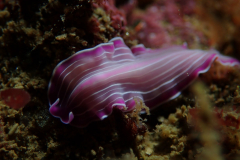 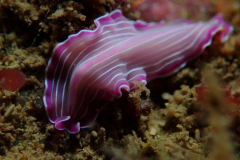 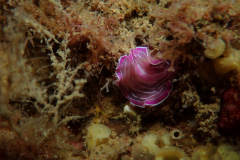 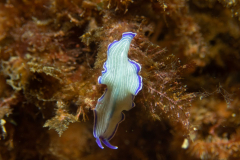 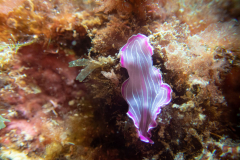 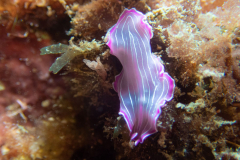 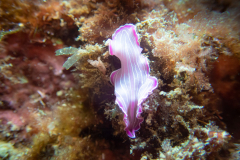